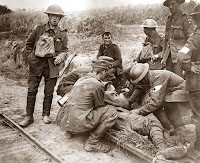 Dark clouds are smouldering into red
While down the craters morning burns.
The dying soldier shifts his head
To watch the glory that returns;
He lifts his fingers toward the skies
Where holy brightness breaks in flame;
Radiance reflected in his eyes,
And on his lips a whispered name.

You’d think, to hear some people talk,
That lads go West with sobs and curses,
And sullen faces white as chalk,
Hankering for wreaths and tombs and hearses.
But they’ve been taught the way to do it
Like Christian soldiers; not with haste
And shuddering groans; but passing through it
With due regard for decent taste.

2 replies on “Siegfried Sassoon, “How to Die””