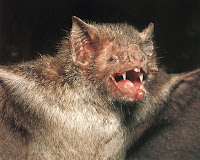 I have never loved vampires.

Rather, I don’t like the idea of vampires. This does not stop me from reading vampire novels, of course. I just don’t prefer them.

The heart of my dislike is vampires killing humans for their own eternal life; secondarily, the way certain types of vampires treat humans as food only. Most contemporary vampire fiction elides this or, better, creates their own lore so that their hero/heroine is not a murderer. I like that type much better; for instance, it doesn’t seem so awful to me if a vampire feeds on their lover in small amounts, giving pleasure or psychic strength or something in return. All of the vampire books I’ve enjoyed have either mutuality (P.N. Elrod), vampires as a separate species who don’t need human blood (J.R. Ward, except I get annoyed that their blood-partner must be of the opposite sex, which isn’t logical to me in a biological sense), or vampires who are considered evil because they kill, and the consequences of that (Barbara Hambly). I’ve also enjoyed vampire stories about humans who fight evil vampires, as in Colleen Gleason’s work.

The other thing I dislike about vampires is that, in romance at least, the vampire hero (nearly always a hero, not a heroine) is almost exclusively given an “alpha male” personality. It makes sense for this to be so; instead of the Duke of Manlypants sweeping in and whisking the heroine away to a new, luxurious lifestyle, the Vampire Studly swoops in and whisks the heroine into immortality, or at the least through a whirlwind of supernatural sex. The only difference is in scale. At base, both are the same fantasy: powerful male chooses heroine out of all others and places her above all others, and she is safe and loved forevermore. If one’s feminist ideals are bothered by the idea, it’s easier to believe in if Mr. Alpha really is more powerful than you because he’s eight centuries old, or can fly, or can mesmerize a city with his glowing gaze.

It was interesting to read Joey Hill’s The Vampire Queen’s Servant, which features a female vampire. I had hopes that I would enjoy it more, but it only reinforced my opinion that what bothered me about vampire books was the power differential. The vampire’s gender didn’t matter to me. Even in a book like that one, with its complex and subtle issues of dominance and submission, it was the vampire ultimately having the power of life and death over his or her romantic partner that kept me from buying into the fantasy.

. It’s really fun, with some interesting variations on both vampire romances and chick lit.

Victoria Janssen [she, her] currently writes cozy space opera for Kalikoi. The novella series A Place of Refuge begins with Finding Refuge: Telepathic warrior Talia Avi, genius engineer Miki Boudreaux, and augmented soldier Faigin Balfour fought the fascist Federated Colonies for ten years, following the charismatic dissenter Jon Churchill. Then Jon disappeared, Talia was thought dead, and Miki and Faigin struggled to take Jon’s place and stay alive. When the FC is unexpectedly upended, Talia is reunited with her friends and they are given sanctuary on the enigmatic planet Refuge. The trio of former guerillas strive to recover from lifetimes of trauma, build new lives on a planet with endless horizons, and forge tender new connections with each other.
View all posts by Victoria Janssen →
This entry was posted in genre, paranormal, reading, romance novels, vampires. Bookmark the permalink.