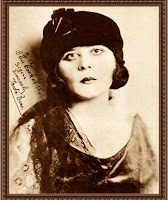 As part of my research into the period of World War One, I watched a video copy of the 1915 Theda Bara movie, A Fool There Was.
It’s a silent, intended both to titillate and to warn against dangerous women. Interestingly, Bara’s character has no name–she’s simply called “The Vampire.”
I did not find Theodosia Goodman (Bara’s real name) to be quite as much a vampire, i.e., vamp, as the audience was obviously meant to. I kept making up little reasonable stories to explain her seemingly awful behavior towards men, because at least she had some spine.
The video quality wasn’t great, and she only had one or two closeups. This is a film I wouldn’t necessarily recommend to anyone for fun, but it’s good research material.
My favorite intertitle: “Kiss me, my fool!”
Vampiric seduction technique: Theda Bara enthralls Schuyler first by having his deck chair placed next to her own, then later by dropping one of her trademark flowers. When he bends to pick it up, she lifts her skirt. Above her ankles. Twice, later on, she deflects him from returning to his wife and Adorable Daughter of the Long Curls simply by entering the room and clasping him in her arms. Did she smear her body with opium?
Favorite historical research moment: The wife of one of Schuyler’s old friends finds out about him and Bara, and refuses to stay in the same hotel. Social contamination from being in the same building?
Best Evil Laugh: Bara yukking it up after a former lover shoots himself in front of her. Really, it was hysteria, because he’d done Bad Things to her…she wasn’t bad, she was just acted that way.