Of Wolves and Men

This post includes some of my research on wolves, for Moonlight Mistress.

I particularly liked Of Wolves and Men by Barry Holstun Lopez, because it featured a lot of observations he and others had made in the wild. The book is from Charles Scribner’s Sons, NY, 1978.

Some quotes:
p. 53 “Wolves do not get hungry in the way we normally understand hunger. Their feeding habits and digestive systems are adapted to a feast-or-famine existence and to procuring and processing massive amounts of food in a relatively short time. They are more or less always hungry. Wolves commonly go without food for three or four days and then gorge, eating as much as eighteen pounds of meat at one sitting.” Digestion then takes 2-3 hours. 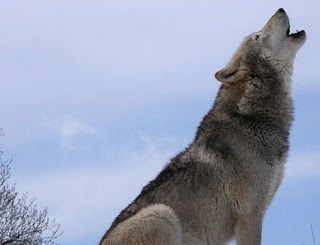 “A Russian record reports a wolf going without food for seventeen days….”

p. 54 “Wolves consume an average of 5-10 pounds of meat a day and wash it down with large quantities of water to prevent uremic poisoning from the high production of urea associated with a meat diet. The wolf has a large liver and pancreas to aid digestion….”

p. 59 “If the prey runs, it is almost certain to be chased. If it refuses to run, or approaches the wolves, it may be left alone…signals, perhaps, between predator and prey.”

p. 67 .”The wolf seems to have few relationships with other animals that could be termed purely social, though he apparently takes pleasure in the company of ravens.”

Victoria Janssen [she, her] currently writes cozy space opera for Kalikoi. The novella series A Place of Refuge begins with Finding Refuge: Telepathic warrior Talia Avi, genius engineer Miki Boudreaux, and augmented soldier Faigin Balfour fought the fascist Federated Colonies for ten years, following the charismatic dissenter Jon Churchill. Then Jon disappeared, Talia was thought dead, and Miki and Faigin struggled to take Jon’s place and stay alive. When the FC is unexpectedly upended, Talia is reunited with her friends and they are given sanctuary on the enigmatic planet Refuge. The trio of former guerillas strive to recover from lifetimes of trauma, build new lives on a planet with endless horizons, and forge tender new connections with each other.
View all posts by Victoria Janssen →
This entry was posted in moonlight mistress, research, werewolves. Bookmark the permalink.