Wendy the Super Librarian and Kristie of Ramblings on Romance are posting about Westerns this week, so I thought I’d list a few of my favorites. 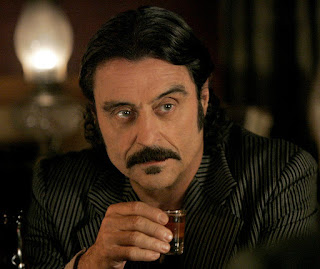 Cowboys Are Frequently Secretly Fond Of Each Other, covered here by Willie Nelson. It doesn’t get much better than that. 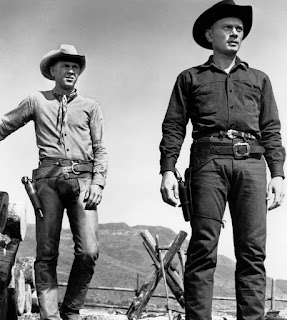 Al Swearengen: Sometimes I wish we could just hit ’em over the head, rob ’em, and throw their bodies in the creek.
Cy Tolliver: But that would be wrong.

Fall from Grace by Megan Chance.

Roping the Wind by Kate Pearce is notable because it’s about a modern cowboy, a rodeo star whose career has been ended by injury. 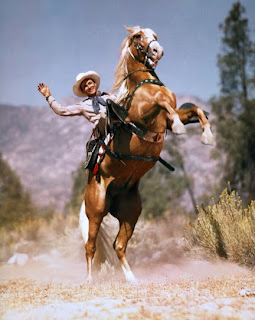 Caine’s Reckoning by Sarah McCarty is more traditional. (It’s from the line that publishes my books, Harlequin Spice.)

Chris: There’s a job for six men, watching over a village, south of the border.
O’Reilly: How big’s the opposition?
Chris: Thirty guns.
O’Reilly: I admire your notion of fair odds, mister.

Helen: What kind of woman are you? How can you leave him like this? Does the sound of guns frighten you that much?
Amy: I’ve heard guns. My father and my brother were killed by guns. They were on the right side but that didn’t help them any when the shooting started. My brother was nineteen. I watched him die. That’s when I became a Quaker. I don’t care who’s right or who’s wrong. There’s got to be some better way for people to live.

Dead Man gets a mention for being a very weird Johnny Depp movie.

Related Posts:
Reading for the Writer.

Victoria Janssen [she, her] currently writes cozy space opera for Kalikoi. The novella series A Place of Refuge begins with Finding Refuge: Telepathic warrior Talia Avi, genius engineer Miki Boudreaux, and augmented soldier Faigin Balfour fought the fascist Federated Colonies for ten years, following the charismatic dissenter Jon Churchill. Then Jon disappeared, Talia was thought dead, and Miki and Faigin struggled to take Jon’s place and stay alive. When the FC is unexpectedly upended, Talia is reunited with her friends and they are given sanctuary on the enigmatic planet Refuge. The trio of former guerillas strive to recover from lifetimes of trauma, build new lives on a planet with endless horizons, and forge tender new connections with each other.
View all posts by Victoria Janssen →
This entry was posted in genre, reading, recommendations, western. Bookmark the permalink.