Love of LIFE, not just a tv detective show

I’m in mourning for Life, a television detective show starring Damian Lewis and Sarah Shahi. It went two seasons and has been cancelled.

I heard a lot about it from friends before I actually saw it; I wanted to see it myself as soon as I learned it 1) starred British actor Damian Lewis and had 2) Damian Lewis playing a cop (Charlie Crews) who’d spent twelve years in prison for murders he didn’t commit. Not only an actor I liked, but a storyline with profound, undeserved angst. How delicious.

I got all that and more; Sarah Shahi as the angsty, ex-addict partner (Dani Reese) who constantly plays straight woman to Crews’ wacky Zen-ish koans and love for fruit, and Alan Arkin as Crews’ prison buddy (Ted Earley) who was convicted of insider trading and now handles Crews’ enormous financial settlement for his false accusation. Arkin’s portrayal is so engaging that I am not disturbed by his former crimes, which in real life would make me exceedingly angry. Shahi wowed me with her portrayal throughout. 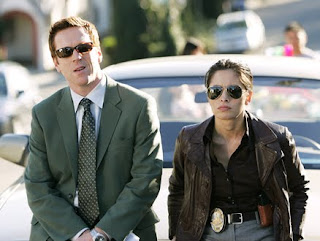 Dani Reese is one of the best female characters I’ve seen on television in a long time. She is shown as flawed and vital, with a life that continues far beyond her role as Crews’ partner. She’s not only an excellent foil, but would have been an excellent protagonist in her own right.

In both seasons, the police captain is also interesting. In first season, the captain is a woman (played by Robin Weigert) who is the former partner of Reese’s father, which leads to all sorts of complications, especially since her father might be implicated in Crews being framed. In the second season, the captain (Donal Logue) is a fish out of water character, transferred from New York City to Los Angeles, whose working methods conflict with those of Crews and Reese; and there are personality conflicts as well.

As for Ted, he’s not just comic relief, but a character in his own right. Did he learn anything from prison? How has he changed since his wheeling and dealing days? How is he going about becoming a better man? How is that manifested through his friendship with Charlie? Is that friendship entirely a healthy one? (I still have no clue how someone in prison for insider training would end up in the same maximum security facility as an accused multiple-murderer, but I am overlooking that, the same tv-goggles way I overlook how Dr. Gregory House is still employed as a doctor.) 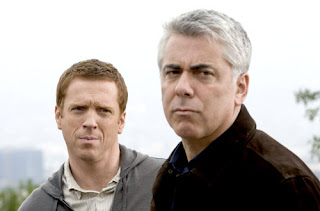 And all the while, there are threads of conspiracy that Crews is attempting to untangle without losing himself entirely to violence.

I love this show for the characterization and the acting, which is all wonderful. I’m still a bit dazzled by the way Lewis can demonstrate a man holding on to himself by his fingernails at the same time as he’s spouting philosophy and picking up women on buses. It’s clear that his sometimes fortune-cookie-like moments are really intended to distract himself from an emotional maelstrom. When he does achieve moments of Zen, it never lasts. It’s a constant fight. The show provided me with all sorts of inspiration for new stories. And that, too, makes it a joy to watch.

Victoria Janssen [she, her] currently writes cozy space opera for Kalikoi. The novella series A Place of Refuge begins with Finding Refuge: Telepathic warrior Talia Avi, genius engineer Miki Boudreaux, and augmented soldier Faigin Balfour fought the fascist Federated Colonies for ten years, following the charismatic dissenter Jon Churchill. Then Jon disappeared, Talia was thought dead, and Miki and Faigin struggled to take Jon’s place and stay alive. When the FC is unexpectedly upended, Talia is reunited with her friends and they are given sanctuary on the enigmatic planet Refuge. The trio of former guerillas strive to recover from lifetimes of trauma, build new lives on a planet with endless horizons, and forge tender new connections with each other.
View all posts by Victoria Janssen →
This entry was posted in genre, television. Bookmark the permalink.

2 Responses to Love of LIFE, not just a tv detective show