Nifty Stuff That Ought To Be In Romance Novels

Nifty Stuff That Ought To Be In Romance Novels

Bored with billionaire heroes and heroines who own their own antique shops? Be bored no more! Include these elements in your romance, and watch it catch fire! (Keep extinguisher handy, and always make sure your smoke detector has batteries that work.) 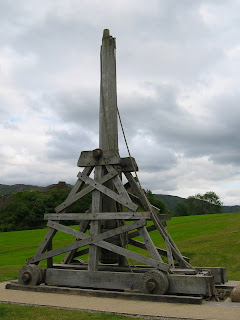 The Atomic Bomb of the Middle Ages.

You don’t even have to use it in a medieval novel. Wouldn’t it be hot if the heroine was an engineer, and was building her own trebuchet? And she meets the hero because her projectile accidentally destroys his Maserati, which he has parked in an area clearly marked dangerous.

There are NASCAR romances, so there’s precedent for romance and vehicles being two great tastes that taste great together. And Monster Trucks got mentioned on House, M.D. one time. Talk about a cool profession for a heroine! She could be a driver, or she could build them, or own a show. For a paranormal, the hero could be possessing a Monster Truck or be an immortal being who always survives crashes. Bonus if you combine Monster Trucks with a trebuchet. 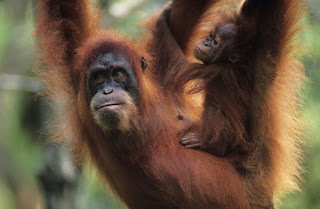 How about a naturalist who studies orangutans? A radical conservationist? A romantic comedy about someone who is fostering an orangutan rescued from hunters? Bonus if heroine is angry at hero and tells him the orangutan is better looking. Extra bonus if there’s a secondary romance between two orangutans. (She was a circus ape! He had spent his life in a zoo! Could they find happiness together in a Florida refuge?) My friend C. suggested were-orangutans for the secondary romance…I leave that up to your discretion.

It’s the national sport of Afghanistan. Here are some pictures.

To play, you need a lot of training, horses, and the headless corpse of a goat. Bonus: the best players, called chapandaz, are usually over the age of 40. So make sure to work in a sexy older hero! Women do not participate or even watch, so far as I know, so there’s ready-made plot conflict. And think of the fun you’ll have with research! Be prepared to dedicate years to learning the sport, of course.

If anyone’s read a romance set in Peru, I’d love to read it, too, so drop me a comment.

Four species of camelids, Incan sites, 2900 orchid species, the Andes and the Amazon river and Lake Titicaca. I defy anyone to be unable to make a novel out of all that. Plus, your trip there could be made tax-deductible…hmmm….

Victoria Janssen [she, her] currently writes cozy space opera for Kalikoi. The novella series A Place of Refuge begins with Finding Refuge: Telepathic warrior Talia Avi, genius engineer Miki Boudreaux, and augmented soldier Faigin Balfour fought the fascist Federated Colonies for ten years, following the charismatic dissenter Jon Churchill. Then Jon disappeared, Talia was thought dead, and Miki and Faigin struggled to take Jon’s place and stay alive. When the FC is unexpectedly upended, Talia is reunited with her friends and they are given sanctuary on the enigmatic planet Refuge. The trio of former guerillas strive to recover from lifetimes of trauma, build new lives on a planet with endless horizons, and forge tender new connections with each other.
View all posts by Victoria Janssen →
This entry was posted in research, romance novels, writing process. Bookmark the permalink.