In honor of Halloween, I offer recommendations of creepy, scary, horrifying fiction.

, a collection of short stories by Angela Carter, all explicitly based on fairy tales. Warning: these stories are not for the squeamish! Really, they’re not. At all. But they’re powerfully written and well worth rereading and pondering.

Cherie Priest is a contemporary author often placed in the Southern Gothic subgenre. Her first novel is Four and Twenty Blackbirds

. Here’s an interesting review of it from a Bulgarian blogger at Temple Library Reviews. “Perhaps the biggest strength here at play is the writing itself, since the author possesses this quality about her prose that entrances the reader and erases all perception of time.” 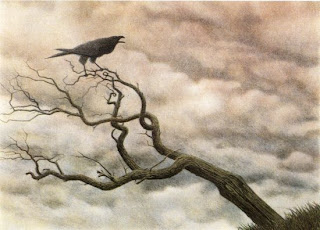 The Haunting of Hill House

or We Have Always Lived in the Castle

are classics of New England Gothic by Shirley Jackson. Did you ever have to read her creepy short story The Lottery (direct link to story) in this collection

in school? That story creeps me out to this day, and has kept me awake at night, thinking. I’ve often wondered if it would be good for a compare and contrast with Ursula LeGuin’s The Ones Who Walk Away from Omelas. (Link leads to a PDF of the story.)

Children of the Night

by Dan Simmons is one of the most interesting vampire novels I’ve ever read. The setting is roughly contemporary, with a science fictional approach to vampirism. It’s not scary, exactly…or rather, the scary feels more like real-world scary. It reads like a mainstream book that happens to have vampires.

by Ray Bradbury – the movie made from it introduced me to actor Jonathan Pryce for the first time, in the role of Mr. Dark. I love Bradbury’s style.

Victoria Janssen [she, her] currently writes cozy space opera for Kalikoi. The novella series A Place of Refuge begins with Finding Refuge: Telepathic warrior Talia Avi, genius engineer Miki Boudreaux, and augmented soldier Faigin Balfour fought the fascist Federated Colonies for ten years, following the charismatic dissenter Jon Churchill. Then Jon disappeared, Talia was thought dead, and Miki and Faigin struggled to take Jon’s place and stay alive. When the FC is unexpectedly upended, Talia is reunited with her friends and they are given sanctuary on the enigmatic planet Refuge. The trio of former guerillas strive to recover from lifetimes of trauma, build new lives on a planet with endless horizons, and forge tender new connections with each other.
View all posts by Victoria Janssen →
This entry was posted in links, reading. Bookmark the permalink.