I’m exactly one month late posting my sixteen favorite romance novels, but, well…here they are anyway, in random order. And it was really hard and made me very sad, but I did it for you.

I limited myself to books published as romance, not science fiction or fantasy or mystery that included a romance in the story. I allowed one book per author. One of my requirements was that I’d read the book more than once and plan to read it again in future; the re-read requirement meant most of the newer books I’ve loved, by new authors or by old favorite authors, didn’t make the list. 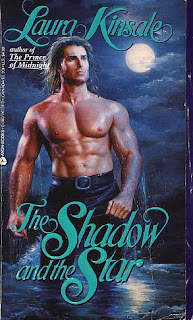 Amazon links for your convenience:
Dance

The Shadow and the Star

Daughter of the Game

Victoria Janssen [she, her] currently writes cozy space opera for Kalikoi. The novella series A Place of Refuge begins with Finding Refuge: Telepathic warrior Talia Avi, genius engineer Miki Boudreaux, and augmented soldier Faigin Balfour fought the fascist Federated Colonies for ten years, following the charismatic dissenter Jon Churchill. Then Jon disappeared, Talia was thought dead, and Miki and Faigin struggled to take Jon’s place and stay alive. When the FC is unexpectedly upended, Talia is reunited with her friends and they are given sanctuary on the enigmatic planet Refuge. The trio of former guerillas strive to recover from lifetimes of trauma, build new lives on a planet with endless horizons, and forge tender new connections with each other.
View all posts by Victoria Janssen →
This entry was posted in genre, historical fiction, reading, recommendations, romance novels. Bookmark the permalink.

8 Responses to My Top 16 Romance Novels