If you haven’t read it yet, check out this article in the LA Weekly: Man on Man: The New Gay Romance. Some of the arguments will be familiar to slash fans, but I was impressed that they interviewed Constance Penley, among others.

One of the problems unique to writing homosexual erotica is pronouns. How do you distinguish he from he or she from she without repeating names or resorting to “the other man” or similar awkward constructions?

I’ve found paragraphing to be a good way to delineate one character from another while avoiding attribution. Sticking to one point of view throughout is also useful, because then the non-pov character is seen by the reader as other automatically. 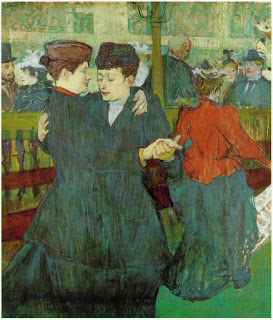 Here’s an example. I used paragraphs here, as well as Travis’s pov. All feelings described thus are experienced by him.

“No…,” Travis said in a low voice. Will was massaging his foot. The sensation was indescribable; a little longer and he would be moaning with sheer physical gratification.

Will shifted to better reach Travis’s foot. “You looked like you could use this.”

“Your hands are warm,” he noted, muzzily.

“Your foot’s cold,” Will said, running his callused thumb from heel to arch.

“Cold all over,” Travis said. He closed his eyes tighter, to concentrate on Will’s fingers gently rubbing his toes. Little swirls of pleasure seemed to caress his calves, his thighs, and even higher.

“We could work on that, too,” Will said. Travis’ eyes fluttered open, then Will continued, “Don’t you have any socks?”

This next method, single pov, was a little less successful. I still had to stoop to “her partner” at one point.

In this example, I didn’t paragraph as much, but tried to move clearly from a section of one character’s action to the other’s.

“You could’ve come back earlier,” Laurel grumped, pulling her face out of a flannel-covered pillow. She stared with narrowed eyes as Zondra stripped out of her post-midterm club clothes, the silver lycra pungent with sweat and cigarette smoke. With a flourish, Zondra whipped out her hair sticks; curls deluged down her bare back. Flinging her arms wide, she waited for applause.

“I’m sleepy,” Laurel said. “And I have rounds in the morning.” But she licked her lips.

Zondra knelt beside her on the bed, her muscular thighs like a perfect ski slope. Laurel began to sit up, deciding she needed to sink her teeth into that luscious flesh, but her partner leaned over and pressed her facedown again.

In this example, I avoided too much switching back and forth between names with descriptive action; since I stayed in Mariamoni’s pov, I didn’t need attribution for the action – it’s clear who’s feeling the sensations, and who’s causing them.

Trude’s mouth came down on hers, wide and wet and warm. She sucked at Mariamoni’s lips as if they were small candies in the flavor she desired above all others. Mariamoni had never realized how slick and hot the interior of a mouth could be, nor how sweet. … She tugged restlessly at her bonds.

Trude gradually shifted position, bringing their bodies closer together. Mariamoni welcomed her warmth and weight, especially the pressure against her bosom, that created a certain deep, pleasurable ache. Her limbs ached, too, with yearning to wrap herself around Trude, a yearning that could not be satisfied.

Looking at these examples made me realize how long it’s been since I’ve written any short fiction!

Victoria Janssen [she, her] currently writes cozy space opera for Kalikoi. The novella series A Place of Refuge begins with Finding Refuge: Telepathic warrior Talia Avi, genius engineer Miki Boudreaux, and augmented soldier Faigin Balfour fought the fascist Federated Colonies for ten years, following the charismatic dissenter Jon Churchill. Then Jon disappeared, Talia was thought dead, and Miki and Faigin struggled to take Jon’s place and stay alive. When the FC is unexpectedly upended, Talia is reunited with her friends and they are given sanctuary on the enigmatic planet Refuge. The trio of former guerillas strive to recover from lifetimes of trauma, build new lives on a planet with endless horizons, and forge tender new connections with each other.
View all posts by Victoria Janssen →
This entry was posted in erotica, writing craft. Bookmark the permalink.