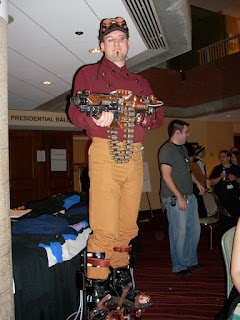 Here are a few photos I took at Arisia, of people in costume. Arisia has a large and popular masquerade (part exhibition, part contest, often including choreographed routines or skits as part of the presentations). Dedicated costumers might have an entry in the masquerade in addition to hall costume or costumes which they wear throughout the convention.
The steampunk costume to the right featured a pair of mechanical stilts, which you can just see at the bottom of the photo. 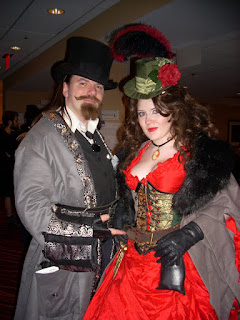 I really loved this look on the left, which I’d classify as steampunk rather than historical. Their jaunty hats make the outfits, I feel. The curling ribbon! The red rose! The green in her hat that matches the green in her corset!

Note his coat seems to be pirate-inspired with the beautiful embroidered cuffs and lapels; also note the little round sunglasses he’s wearing at his throat, and the detail around the neckline of her dress. 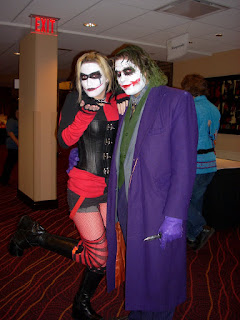 I chose this last photo to show that not all the costumes were steampunk! The Joker competed in the masquerade and, while merely walking around, did a great job of projecting an air of crazed menace with his accurate recreation of the character’s walk from the movie.

The two of them were getting stopped for photos every few feet as they tried to cross the hotel’s narrow lobby. At one point, I saw The Joker riding up in one of the glass elevators, together with a pitch-perfect Batman.

Victoria Janssen [she, her] currently writes cozy space opera for Kalikoi. The novella series A Place of Refuge begins with Finding Refuge: Telepathic warrior Talia Avi, genius engineer Miki Boudreaux, and augmented soldier Faigin Balfour fought the fascist Federated Colonies for ten years, following the charismatic dissenter Jon Churchill. Then Jon disappeared, Talia was thought dead, and Miki and Faigin struggled to take Jon’s place and stay alive. When the FC is unexpectedly upended, Talia is reunited with her friends and they are given sanctuary on the enigmatic planet Refuge. The trio of former guerillas strive to recover from lifetimes of trauma, build new lives on a planet with endless horizons, and forge tender new connections with each other.
View all posts by Victoria Janssen →
This entry was posted in arisia, conferences, images, steampunk. Bookmark the permalink.

1 Response to Costumes at Arisia 2010