I recently attended Arisia, a Boston-area science fiction/fantasy/a lof of other things conference. I got permission from Butch Honeck, one of my favorite sculptors in bronze, to post some photos from his dealer room at the convention. 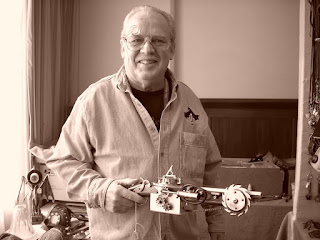 Here’s a steampunk-style pistol he built (bonus sepia for bonus steampunk-ness!). You can’t tell from the photo, but it has moving parts – gears and a chain – that make warm whirring sounds. He let me play with it without making me buy it. He had several pistols with different features. 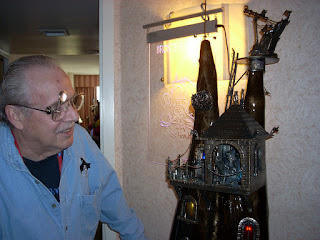 Here he is checking out one of his larger sculptures, also with moving parts. Note the magnifying lenses attached to his glasses. He sells those for steampunk afficionadoes, but apparently they’re quite functional. 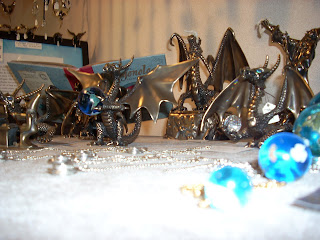 Pretty dragons. I’ve enjoyed looking at his work for years, and own three bronze turtles from his line of miniature animals as well as a pair of earrings. 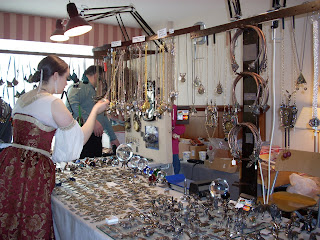 A wider view of one of his display tables at Arisia. The woman in costume is examining pocket watches, some of them of the “real” hand-wound type.

Victoria Janssen [she, her] currently writes cozy space opera for Kalikoi. The novella series A Place of Refuge begins with Finding Refuge: Telepathic warrior Talia Avi, genius engineer Miki Boudreaux, and augmented soldier Faigin Balfour fought the fascist Federated Colonies for ten years, following the charismatic dissenter Jon Churchill. Then Jon disappeared, Talia was thought dead, and Miki and Faigin struggled to take Jon’s place and stay alive. When the FC is unexpectedly upended, Talia is reunited with her friends and they are given sanctuary on the enigmatic planet Refuge. The trio of former guerillas strive to recover from lifetimes of trauma, build new lives on a planet with endless horizons, and forge tender new connections with each other.
View all posts by Victoria Janssen →
This entry was posted in arisia, conferences, images, steampunk. Bookmark the permalink.