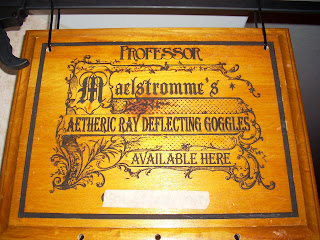 Professor Maelstromme’s Steam Laboratory and Brute Force Studios were at Arisia this year, and kindly allowed me to take a few photos for my blog. Here’s the Good Professor’s blog: “Incorporating mildly dangerous artifacts into compelling jewelry”. I didn’t get a chance to meet her in person. 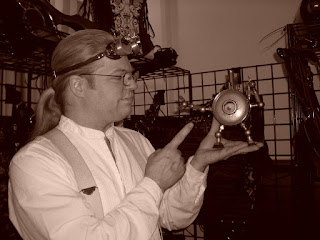 Behold the steam-robot. This picture is my favorite because it looks like he’s lecturing the little robot. In bonus sepia for bonus steampunk-aura!

You can see hints of some of the corsetry for sale in the background. 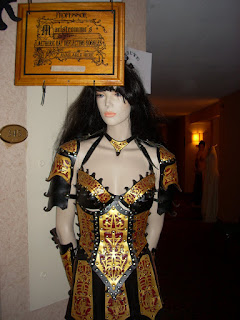 This costume is even more amazingly intricate in person than in a photo. Those patterns are actually cutouts, the gold leather cut away to show the red leather beneath.

I was very tempted by some leather chokers and especially by a forearm-guard/communications device that was decorated with vintage typewriter keys, but I restrained myself. (I did visit it twice, though!) You can have a look at it here.

Being a science fiction fan means never having to say, “Where would I wear that?”