One of the reasons I most enjoy researching and writing about World War One is that it’s a time period rich in issues that interest me. For instance, in Great Britain during World War One, woman suffrage was still being debated, and sex between two men was still a crime. These gender issues are still relevant today, as women continue to fight for true equality in education and employment, and the right to marry a same-sex partner (or even to have such a partner) remains illegal in many countries. 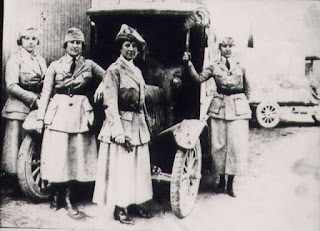 For those reasons, I included several female characters who were on the edges of acceptability in 1914. One is a professional chemist. Unable to obtain an academic position because of her gender, she works as a nurse, stealing research time when she can find it. Another, unable to make a living at her chosen trade, disguises herself as a man. Both of these women, in taking on roles separate from what their society expects of them, mirror the shapechanging werewolves in the story.

Another subplot follows a gay man who longs for acceptance even more than he longs for love. He cannot know if the object of his affections shares his preferences, and if he reveals himself the consequences could be dire. Another character is slowly coming to terms with the idea that he is bisexual. It’s easy for the present-day reader to identify him as such, but the character doesn’t know if anyone else like him exists in the world. They, too, can be seen as mirrors of the werewolves: hiding in plain sight, always looking for others of their kind.

The werewolves can stand in for any outsider, whether societal outcast or stranger in a strange land. The reader, hopefully, will find her own resonance in the story.

Science fiction, often ostensibly about the future, offers a truer picture of the writer’s world. Historical fiction, too, doesn’t represent the past as it happened, but the past as we, looking back, see it. The view is distorted by our past experiences and opinions, not only those we consciously notice but those that are so ingrained that we don’t even think to question them.

As a writer I can’t control, for the most part, what interpretations readers bring to my stories. Too much happens in the gaps between what I’ve written and the reader’s personal experiences. The two mingle together and give a different picture to each reader. The best I can do is offer the reader as much fodder for the subconscious as I can possibly manage.

Victoria Janssen [she, her] currently writes cozy space opera for Kalikoi. The novella series A Place of Refuge begins with Finding Refuge: Telepathic warrior Talia Avi, genius engineer Miki Boudreaux, and augmented soldier Faigin Balfour fought the fascist Federated Colonies for ten years, following the charismatic dissenter Jon Churchill. Then Jon disappeared, Talia was thought dead, and Miki and Faigin struggled to take Jon’s place and stay alive. When the FC is unexpectedly upended, Talia is reunited with her friends and they are given sanctuary on the enigmatic planet Refuge. The trio of former guerillas strive to recover from lifetimes of trauma, build new lives on a planet with endless horizons, and forge tender new connections with each other.
View all posts by Victoria Janssen →
This entry was posted in historical fiction, moonlight mistress, writing craft. Bookmark the permalink.

7 Responses to Today Through History