Fantasy novels are rife with girls dressed up as boys. I’m not sure if it’s because there are so many female fantasy readers versus so many male fantasy heroes, or if it’s a result of a common romance-adventure trope sliding into its modern subgenre, or a combination of both, or neither.

Anyway, here are some of my favorites in the fantasy genre. 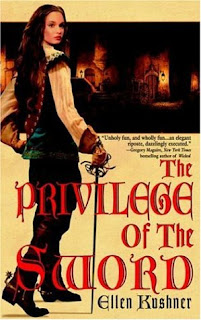 Ellen Kushner, The Privilege of the Sword: notable in that the heroine doesn’t really want to be dressed as a boy, and learn to fight with swords. This changes. I think this is one of the best examples of integrating cross-dressing into the novel as a whole, so it’s integral to characterization, plot, and theme. An excellent review by Yoon Ha Lee. Here’s another at Green Man Review.

Lynn Flewelling, The Bone Doll’s Twin: takes cross-dressing to an extreme. The heroine is magically disguised as a boy (to be the image of her dead twin) from the time she’s a baby; if it’s discovered she’s female, and might fulfill a prophecy, she’ll be killed. Until she’s a teenager, she doesn’t know what’s been done to her. It’s a dark novel with some horror elements, and I think the best of Flewelling’s work. The sequels, when the heroine has been returned to her own female form, are lighter in tone with a more epic fantasy feel.

Marion Zimmer Bradley, Hawkmistress!: I enjoyed this book a great deal in high school, but I suspect it might not hold up for me today. The heroine disguises herself as a boy and takes to the road, earning her keep using her telepathic gift with birds. I remember being very disappointed when her sex was discovered, and thought the novel suffered after that.

Tamora Pierce, Alanna: the First Adventure: a middle grade/young adult novel in which the title character takes her brother’s place in learning to be a royal page. A classic example of the form.

And let’s not forget Eowyn in J.R.R. Tolkien’s The Return of the King. It’s a small part of the whole, but a most satisfying part.

Victoria Janssen [she, her] currently writes cozy space opera for Kalikoi. The novella series A Place of Refuge begins with Finding Refuge: Telepathic warrior Talia Avi, genius engineer Miki Boudreaux, and augmented soldier Faigin Balfour fought the fascist Federated Colonies for ten years, following the charismatic dissenter Jon Churchill. Then Jon disappeared, Talia was thought dead, and Miki and Faigin struggled to take Jon’s place and stay alive. When the FC is unexpectedly upended, Talia is reunited with her friends and they are given sanctuary on the enigmatic planet Refuge. The trio of former guerillas strive to recover from lifetimes of trauma, build new lives on a planet with endless horizons, and forge tender new connections with each other.
View all posts by Victoria Janssen →
This entry was posted in genre, reading, recommendations, sf/f. Bookmark the permalink.