Out of the Black
by Mima

In the fall of 2005, my husband dared me to stop writing scenes and openings in my pretty journals. He dared me to stop bitching about the books I’d paid good money for and throwing them across the room and moaning to him about how I could have written better. And he reminded me how I glowed when I finished a wonderful story and sighed about wanting more just like it. “So do it,” he said.

I have a book I wrote very young, bound with yarn, about my family vacation. I began keeping a diary in second grade. I also have my first script for a humorous puppet show my friends agreed to put on in third grade. It was a scifi. My first romance was in the fourth grade, and my first rejection came in the seventh grade, for a fantasy poem about a unicorn *wince*. I won an award for my creative writing in undergrad, but mostly I’ve written all my life, for me. 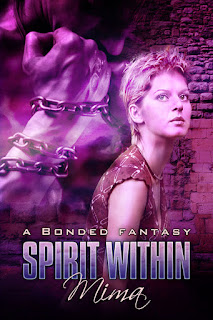 My first book, then called Out of the Black, clocked in at 250k words. I cut out three major subplots (for interested fans: there were 2 other friends besides Freezha, Rylan’s parents and his reunion with them, and also a third, more serious suitor for KarRa besides Merk). I added more sex, and cut out a massive amount of specious geek-a-licious history of Vladaya and the Clans. It became Wild Within at 85k words. It became the base for a series that will be 10 books when finished (plus some anthologies for all the people who keep writing me about my secondary characters), has generated awards, fan mail (!!!), and given me hours of pleasure exploring.

Passionate readers who are secret writers can be assured there are other readers out there who want quirky stories that don’t quite fit in any one box. We like ‘em weird. We’ll read raw talent that still needs polishing, and we’ll follow you as you get better and better. Like people have done for me.

Bio:
Mima lives in western NY with a heroic guy and a black cat. Visit her at www.mimawithin.com.

Victoria Janssen [she, her] currently writes cozy space opera for Kalikoi. The novella series A Place of Refuge begins with Finding Refuge: Telepathic warrior Talia Avi, genius engineer Miki Boudreaux, and augmented soldier Faigin Balfour fought the fascist Federated Colonies for ten years, following the charismatic dissenter Jon Churchill. Then Jon disappeared, Talia was thought dead, and Miki and Faigin struggled to take Jon’s place and stay alive. When the FC is unexpectedly upended, Talia is reunited with her friends and they are given sanctuary on the enigmatic planet Refuge. The trio of former guerillas strive to recover from lifetimes of trauma, build new lives on a planet with endless horizons, and forge tender new connections with each other.
View all posts by Victoria Janssen →
This entry was posted in guest, writing. Bookmark the permalink.