p. 82 “The use of obscenity and scatology…increased greatly during World War I and became prolific during World War II. The use of the cursing modifier fucking, for damned, first reached epidemic proportions with British soldiers during World War I, by which time they were also using fuck arse (for a contemptible person, which American troops translated into fuck ass), fuck me gently (literally “don’t take advantage of me too much, don’t cheat me too blatantly”), fuck ’em all, and make a fuck up of (“bungle, ruin”).” 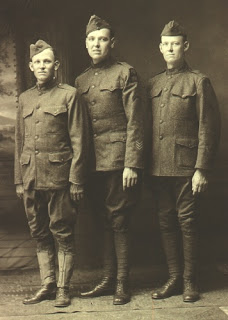 p. 84 “Shithead is known from 1915…By 1918 S.O.L. was a common abbreviation for the older shit out of luck…In World War I the old rural term shithouse became a popular soldier’s word for latrine, while shit alley was a particularly dangerous battlefield or position while shit pan alley was a military hospital (a pun on the 1914 Tin Pan Alley).”

p. 86 “Son of a bitch was used so often by World War I American soldiers as an expletive or intensive that Frenchmen called them “les sommobiches.” The abbreviation S.O.B. also appeared during World War I.”

“Chow, which had been a slang word for food since 1856, became common in World War I, along with chowhound.”

“Dud…By 1919 it had broadened to mean anything that did not meet expectations.”

“By the end of the war…to goldbrick meant to shirk.”

“Shell shock, 1915, originally a British coinage, found wide use by Americans even though the official military term was battle fatigue.”