My feet are starting to hurt. I planned to stop by the autographing session with Holly Black and Justine Larbalestier, to say hi, except when I saw the cattle-chute arrangement and the vast hordes of people signing and waiting for signatures, I retreated in terror. 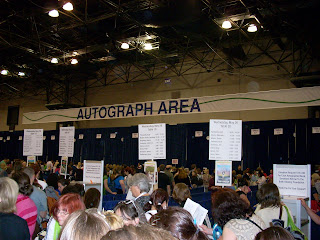 I continue to have good luck finding people I know. On my way from visiting Laura Anne Gilman and Christine Merrill at their Harlequin signing, I ran into Ellen Kushner, whom I hadn’t seen in a while. We chatted for a while, exchanged looks at our new projects, and then wandered over to visit Small Beer Press, which was part of a Consortium. I spent a pleasant while chatting with Gavin Grant, someone else whom I haven’t seen in quite a while, and was introduced to Juliet Ulman of Pugilist Press. On my way to the autographing, I ran into Esther Friesner.

Exciting exhibitor booths I found: Osprey Press! Home of all those lovely focused, detailed World War One books I use for research! And I visited the Cleis Press booth, and was able to tell them how happy I was to be published by them over the years. I also visited the Feminist Press of City University of New York, and got a free button with their logo.

Yes, my quest to remain schwag-less has failed. I have one category romance (signed), a Harlequin tote bag (I can’t turn down my own publisher!), the button from Feminist Press, and an ARC from Small Beer, intended for a friend who often reviews.

I did hand out a few cover flats. So far, the response to the new cover has been very positive.