It’s been an eventful couple of weeks for me. 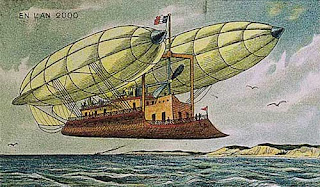 For the last few months I’ve been working on a sequel to my World War One werewolf novel, but my next published novel for Spice will be a different project instead: a steampunk Western. The tentative release date is spring/summer 2012.

I don’t have a title yet, but I do have characters! The men include a Native American scientist who’s also a bit of a diplomat/spy; a down-on-his-luck younger son of a British aristocrat, who was thrown out of Cambridge for his scientific experiments; and a charming gambler/con man who happens to be an extraordinary mechanic. The women are an airship pilot who bears a bit of resemblance to Han Solo in personality, and an east coast bluestocking engineer who’s fleeing marriage.

I’ve already begun collecting research materials. This won’t be a historical; rather, it’s an alternate universe with a few ties to “real” history and a whole variety of extrapolations. I’m really excited to work out the details!

Victoria Janssen [she, her] currently writes cozy space opera for Kalikoi. The novella series A Place of Refuge begins with Finding Refuge: Telepathic warrior Talia Avi, genius engineer Miki Boudreaux, and augmented soldier Faigin Balfour fought the fascist Federated Colonies for ten years, following the charismatic dissenter Jon Churchill. Then Jon disappeared, Talia was thought dead, and Miki and Faigin struggled to take Jon’s place and stay alive. When the FC is unexpectedly upended, Talia is reunited with her friends and they are given sanctuary on the enigmatic planet Refuge. The trio of former guerillas strive to recover from lifetimes of trauma, build new lives on a planet with endless horizons, and forge tender new connections with each other.
View all posts by Victoria Janssen →
This entry was posted in business of writing, steampunk, writing process. Bookmark the permalink.

31 Responses to My New Steampunk Project