I read about a workshop at the RWA Conference whose topic, I think, was writing for women versus writing for men. I didn’t attend, so the actual title didn’t stick in my mind. However, it sparked thoughts, and I of course had to pour those thoughts into a blog post. With a hot picture of Josephine Baker wearing a top hat. 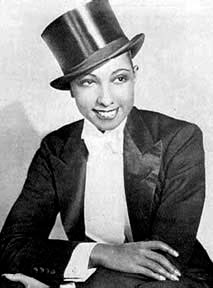 I write for women. At least I think I do. The line that publishes my novels, Harlequin Spice, is aimed at a female audience, so by default that says I write for women, right? I’m not sure what that means, exactly, beyond “books most women will like,” which to me also suggests “books some men will also like.”

I’ve had reports from a few men who’ve read either The Duchess, Her Maid, The Groom and Their Lover or The Moonlight Mistress or both. Most have been boyfriends or husbands of female friends who’d bought the book. All of the men whom I’ve heard from, about five, so it’s not a large sample, have liked the books; most commented not only on the stories, but on the erotica. They commented very favorably on the erotica; more so than some female readers who told me they were uncomfortable with the language I used.

I didn’t really expect to hear anything from male readers, especially not that they’d liked the sex scenes. Possible factors include 1) these particular men like reading erotica in general, and are willing to talk about it; 2) my direct language in the sex scenes appeals to men; and 3) they were just being nice.

I don’t really have any conclusions. Though I do wonder how I might market my books more effectively across genders.

Victoria Janssen [she, her] currently writes cozy space opera for Kalikoi. The novella series A Place of Refuge begins with Finding Refuge: Telepathic warrior Talia Avi, genius engineer Miki Boudreaux, and augmented soldier Faigin Balfour fought the fascist Federated Colonies for ten years, following the charismatic dissenter Jon Churchill. Then Jon disappeared, Talia was thought dead, and Miki and Faigin struggled to take Jon’s place and stay alive. When the FC is unexpectedly upended, Talia is reunited with her friends and they are given sanctuary on the enigmatic planet Refuge. The trio of former guerillas strive to recover from lifetimes of trauma, build new lives on a planet with endless horizons, and forge tender new connections with each other.
View all posts by Victoria Janssen →
This entry was posted in business of writing, erotica, writing, writing craft. Bookmark the permalink.