There are various schools of thought about adding historical detail to fiction. Sometimes you want more detail, sometimes less; partly, that depends on the book’s genre. For example, in a Tom Clancy novel such as The Hunt for Red October, there is a lot–a lot–of detail about nuclear submarines. But if you’re reading that book, it’s likely that one of the reasons is because of all that lovely, crunchy technical detail. 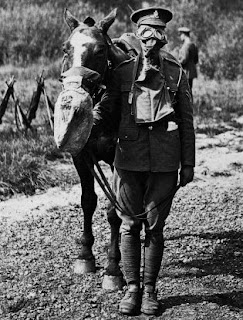 There should be as much historical detail as I want. And the geekier, the better.

If the details I choose to include are not what the reader expects, that’s all to the good. Those details will stick better for being unusual. (cf. the picture of a horse wearing a gas mask.) And because they stick in the reader’s mind, they’re more useful for building up a picture of the time period, and also a picture that feels deeper and richer than whatever generalized ideas the reader might have had. (What does World War One mean to you? Trenches? There was fighting in the mountains of Italy, as well. And in Africa.) I feel anything that brings the reader more completely into the story is a good thing. 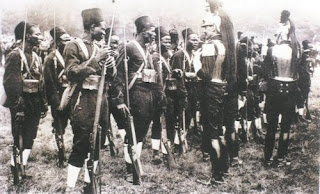 The more geeky the detail, the more that detail feels specific. Specificity is important; the more specific, the more vivid and immediate the image becomes in the reader’s mind. You can say, there were birds. Or you can say, she remembered the poignant cries of bitterns and the song of reed-warblers, and the occasional slow dignified silent soaring of a heron towards the far horizon.

The more specific the detail, the less often you have to use detail, and the more subtly you can use it.

Research: When to Stop.

Victoria Janssen [she, her] currently writes cozy space opera for Kalikoi. The novella series A Place of Refuge begins with Finding Refuge: Telepathic warrior Talia Avi, genius engineer Miki Boudreaux, and augmented soldier Faigin Balfour fought the fascist Federated Colonies for ten years, following the charismatic dissenter Jon Churchill. Then Jon disappeared, Talia was thought dead, and Miki and Faigin struggled to take Jon’s place and stay alive. When the FC is unexpectedly upended, Talia is reunited with her friends and they are given sanctuary on the enigmatic planet Refuge. The trio of former guerillas strive to recover from lifetimes of trauma, build new lives on a planet with endless horizons, and forge tender new connections with each other.
View all posts by Victoria Janssen →
This entry was posted in erotica, historical fiction, research, wwi. Bookmark the permalink.