If you’ve never been to New York City before, and if you’re debating whether or not to attend the 2011 RWA National Conference in New York City, here are some of my thoughts. 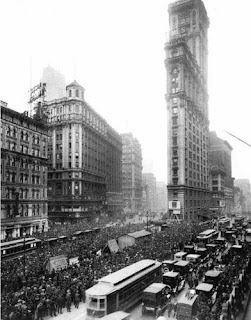 Because the city is a major destination, it might be easier to find cheap flights; if you live in an area where it’s possible, it’s also very easy to take the train to Penn Station, which is close to the conference hotel. The hotel, the Marriott Marquis, is expensive, but unlike in some other cities, you won’t be limited to the onsite hotel restaurants; Midtown is crowded with restaurants with a wide range of prices. (Though take note, the Marquis has a cool revolving rooftop restaurant!)

Depending on your tourism desires, sightseeing can also be very cheap in New York, if you’re willing to walk and take the subway. (Cabs are reasonable as well, but sometimes hard to come by during rush hour or in certain neighborhoods). There are myriad guides and helpful websites to tourism in the city. And the people-watching can’t be beaten.

Plus, you can also attend the International Association for the Study of Popular Romance Conference, which is piggybacked on RWA. One trip, two conferences!