What about the Regency Romance appeals, in the past and now? Here are some thoughts. I’m not sure I entirely agree with myself on every point, if that makes sense…but I’m going to ramble on anyway, going one way and the other.

I think there’s a difference between historical romance novels that are set during the Regency period and the Regency Romance, a sub-genre that I’ve heard people say originates with the novels of Georgette Heyer. When I speak of the Regency Romance, I really mean the novels published by Signet from 1974 through 2006 and those that are similar to them. (Here’s a page with authors and titles and here’s another.) 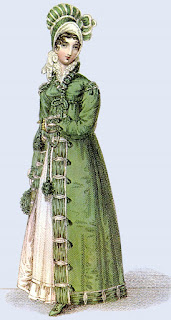 The Signet Regencies are about the length of category romances. The vast majority, like Georgette Heyer’s novels, have no explicit sex and instead focus tightly on the courtship between the heroine and hero. The historical events going on around the couple aren’t usually deeply explored unless there’s some reason for the couple to be involved in the event. I don’t remember many where that happened (but if you know of examples, please comment!). An example might be Carla Kelly’s One Good Turn, in which the heroine survived terrible events following the battle of Badajoz. The reader’s given enough information to know what happened to the characters in relation to the battle, but the battle’s root causes and results aren’t explored in depth because it isn’t necessary for the romance.

Thus, if you’re reading a Regency, you don’t have to know much about the details of the period to follow the story, so long as you understand the basic concept that courtship was constrained by etiquette. Distinctions of social class, for example, might be important to the story if the hero owns a factory and the heroine is the daughter of a duke. The writer gives historical detail to the reader that is sufficient for the story’s purpose, just as when a writer presents elements of worldbuilding in a fantasy novel. But the historical element is secondary to the Regency Romance’s story. For the most part, these novels do not go beyond parks and drawing rooms. 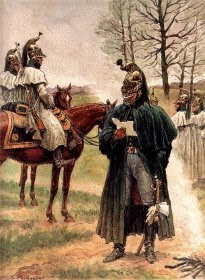 I could argue that the historical detail in a historical novel is always secondary to the story, otherwise it would be nonfiction. But in the case of the Regency Romance, I think the historicity is deliberately seconded to the courtship. Historical detail is added value, but the constrained courtship story could very easily be told in any number of settings.

So why Regency? Is it because Georgette Heyer made the period popular? Because the constrained social roles of the characters are comforting/reassuring because the reader thus knows what to expect? Or because the men might be wearing really tight pantaloons? What do you think?

And now, the “traditional” Regency Romance is rare. These novels had a good market for quite a while. Were they replaced by historical romances set during the Regency, which because of longer length had more scope for a wider range of relationships, including sexual relationships? The continued success of Mary Balogh, and an influx of excellent new writers such as Tessa Dare, argue that the historical period remains popular. It’s just the format that has shifted from category to single-title.

But I think there is still an audience for stories similar to the traditional Regency romance. I am thinking about the current interest in Amish romances, here discussed in the Wall Street Journal and Time Magazine and The Pittsburgh Post-Gazette. These novels have romance without showing explicit sexual relationships, and show life constrained by etiquette. Are these popular among non-Amish readers because the setting feels like Fantasy, another world that one can imagine is simpler than ours?

Incidentally, reprints of Georgette Heyer’s work are proliferating right now. Is she taking back the market she founded?

Victoria Janssen [she, her] currently writes cozy space opera for Kalikoi. The novella series A Place of Refuge begins with Finding Refuge: Telepathic warrior Talia Avi, genius engineer Miki Boudreaux, and augmented soldier Faigin Balfour fought the fascist Federated Colonies for ten years, following the charismatic dissenter Jon Churchill. Then Jon disappeared, Talia was thought dead, and Miki and Faigin struggled to take Jon’s place and stay alive. When the FC is unexpectedly upended, Talia is reunited with her friends and they are given sanctuary on the enigmatic planet Refuge. The trio of former guerillas strive to recover from lifetimes of trauma, build new lives on a planet with endless horizons, and forge tender new connections with each other.
View all posts by Victoria Janssen →
This entry was posted in category, historical fiction, romance novels. Bookmark the permalink.

1 Response to Regencies and Amish Romance