Rather than summarize the British dark comedy series Blackadder Goes Forth for those who’ve never seen the series, I’ll provide a link to the detailed Wikipedia page. It’s set on the Western Front in 1917, and starred Rowan Atkinson. A comedy set in the trenches? Why, yes. It does work.

Fans of the American television show House, M.D. should note that its star, Hugh Laurie, played Lieutenant George in Blackadder Goes Forth. 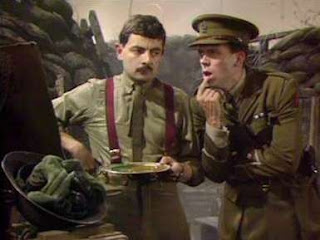 I was already interested in World War One (probably from reading too many Peter Winsey mysteries) when this series aired, but the events explored and parodied in this show cemented my interest, and three or four years later I began to research the period seriously.

Every episode criticized the British High Command’s methods of pursuing the war; other episodes addressed the limited lifespans of military airplane pilots, the desperate lengths to which soldiers would go for entertainment, and bizarre plans for escaping the trenches from which, even in the final episode, there was no real escape. Throughout, there’s a strong message of peace, and despite the dark events, that’s what makes me continue to enjoy it. 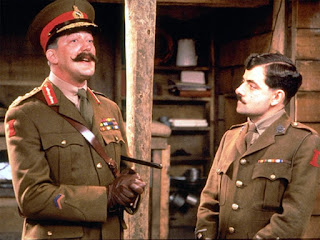 Melchett: Field Marshal Haig has formulated a brilliant new tactical plan to ensure final victory in the field.
Blackadder: Ah. Would this brilliant plan involve us climbing out of our trenches and walking very slowly towards the enemy?
Captain Darling: How could you possibly know that, Blackadder? It’s classified information!
Blackadder: It’s the same plan that we used last time and the seventeen times before that.
Melchett: Exactly! And that is what is so brilliant about it! It will catch the watchful Hun totally off guard! Doing precisely what we’ve done eighteen times before is exactly the last thing they’ll expect us to do this time! There is, however, one small problem.
Blackadder: That everyone always gets slaughtered in the first ten seconds.
Melchett: That’s right. And Field Marshal Haig is worried this may be depressing the men a tad. So he’s looking for a way to cheer them up.
Blackadder: Well, his resignation and suicide seems the obvious choice.
Melchett: Hmm, interesting thought. Make a note of it, Darling.

Victoria Janssen [she, her] currently writes cozy space opera for Kalikoi. The novella series A Place of Refuge begins with Finding Refuge: Telepathic warrior Talia Avi, genius engineer Miki Boudreaux, and augmented soldier Faigin Balfour fought the fascist Federated Colonies for ten years, following the charismatic dissenter Jon Churchill. Then Jon disappeared, Talia was thought dead, and Miki and Faigin struggled to take Jon’s place and stay alive. When the FC is unexpectedly upended, Talia is reunited with her friends and they are given sanctuary on the enigmatic planet Refuge. The trio of former guerillas strive to recover from lifetimes of trauma, build new lives on a planet with endless horizons, and forge tender new connections with each other.
View all posts by Victoria Janssen →
This entry was posted in television, wwi. Bookmark the permalink.