On the Female Vampire

A monster is monstrous because it violates accepted boundaries. Often these boundaries are physical. Creatures of the twilight world like minotaurs, werewolves, insectoid aliens, selkies, sirens and mermaids cause fascination and discomfort because they are cross the reassuring threshold that separates human from animal. Vampires are generally human-formed, but still they manage to be more transgressive than any other monster. They violate boundaries right and left. They’re neither dead nor alive. They occasionally shift form. They live on blood–which makes them cannibals, which, needless to say, is a big boundary–or perhaps it makes them parasites, which aligns them with the insect world–or maybe it makes them demons, which aligns them with the spirit world. And when they’re not invading your body, they’re invading your mind. When you submit to them, you submit body, mind and soul. They own you. They’re slavers. They break all of our laws, conventions and beliefs–and tempt us to break them too.

For a vampire, feeding is sex. It’s a penetrative act of possession. One so powerful that used to eclipse intercourse. Dracula ruins Lucy far more completely than any determined rake. Anne Rice’s vampires, as I recall, don’t have sex. Having experienced the ultimate act of penetration and surrender, they loll around in sensual, bisexual languor. But those are old school vampires. Something has shifted in the perception of vampires of late. Vampires in popular literature and entertainment have become more sexual, more heterosexual and almost exclusively male.

The vampires of today’s romances are masculine, desirable heroes, relieved of both sexual ambiguity and the stench of the grave. This new breed of male vampire is generally isolated and sympathetic in his misery: Mr. Rochester with fangs. He’s an alpha male of an extreme sort, coldly handsome, immortal, preternaturally strong, supernaturally persuasive, and fitted with penetrative equipment both upstairs and downstairs, all the better to claim you–if you’re the one and only woman for him. This makeover strips much of the shivery terror from the mythos, but the trade off is that it makes room for hot fantasy.

My take on this–and please do feel free to argue otherwise–is that while we’ve normalized male vampires enough to make them romantic heroes, female vampires remain too trangressive to be heroines.

Let’s take a step back. In the 19th century, when all vampires were monsters, female vampires were perhaps even more vile than their male counterparts. Being the weaker sex, they could not hunt fairly. They fed either through sexual guile or by preying on children–making them lower than low. Painters and poets of that age were enraptured with idea of the female vampire as a seductress. Victoria posted a Baudelaire poem about a female vampire on this blog just a couple of weeks ago, and if you didn’t see it, it’s well worth a read. [http://victoriajanssen.blogspot.com/2010/05/metamorphoses-of-vampire-charles.html] 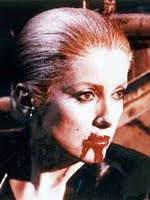 The sexual power of the female vampire threatens social norms. Earlier I spoke of the penetrative aspect of feeding. It’s inherently a sexual act. Yet while the male vampire may feed on men, he seduces women. (That is, unless you’re reading specialized erotic fiction.) The female vampire tends to be more openly bisexual, so voracious in her appetites that she cannot be constrained by gender. This perception is strong, and continues from the earliest female vampires to today. Miriam Blaylock, as portrayed by Catherine Deneuve in The Hunger (1983), is a sleek, glamorous, ruthless bisexual hunter. She takes both Susan Sarandon and David Bowie as lovers–and eats a child in the bargain as well. To me, she has always been the modern archetype of the female vampire.

I’m not saying this is a bad thing. I’m just saying the terrain has changed. I can’t address all vampires in all genres, only the vampire tales written today by (mostly) female authors for a (mostly) female audience under the banner of romance. In this genre, the prospect of being devoured by your lover is eroticized, as it was for those 19th century gentlemen, but now it is not framed as repugnant. Instead, it is the ultimate form of acceptance and bonding.

That sexual dynamic only works one way, however. It’s hot when an alpha vamp claims his mate through blood and sex, but that power relationship cannot be flipped. When a female vampire penetrates her human lover, it somehow makes him less of a man. Her claiming of him might make for good horror, but it doesn’t add up to satisfying romantic fiction.

The double standard goes on. The intense predatory drive that makes a male vampire sexy doesn’t translate in the same way for a female vampire. That same drive makes her a dangerous, unbalanced stalker. Similarly, a male vampire is usually portrayed as handsome and aware of his magnetic attraction, but he’s not vilified for it–in fact, it’s part of his appeal. Whereas when a female vampire uses her seductive powers, its trickery. Doing so breaks the unwritten commandment that a romantic heroine be modest: either she doesn’t know she’s ravishing, or doesn’t care. Only wicked women use their looks like a blade.

It’s all about reader identification. The best part of reading a romantic fantasy is imagining what it would be like if you–ordinary, human you–found yourself face to face with a creature of the otherworld. How would you react? Could you love such a being? We enjoy experiencing a romance through the eyes of a woman whom we can relate to–an ordinary woman who finds herself in extraordinary circumstances. It is much harder to relate to a heroine who is a powerful, ruthless, bloodthirsty, and possibly immortal.

And that’s not because we don’t appreciate a powerful female, but rather because being unable to identify with her takes some of the fun out of this particular kind of reading experience. One of the oldest and most compelling storylines is the one in which an ordinary person tests herself against powers and mysteries beyond her imagination–and earns love along the way. That kind of story always hits the spot. There’s good reason for its enduring popularity.

So as much as I like a lady vampire, I don’t expect to see them crowding romances as heroines any time soon. And having thought about this for a while, I’ll admit I’m okay with that. I like the idea that they can’t be domesticated into do-gooder heroines who settle down into a happily-ever-after. Like their progenitor, Lilith, they embody the darker side of female power, and that stuff is too powerful to be bottled. 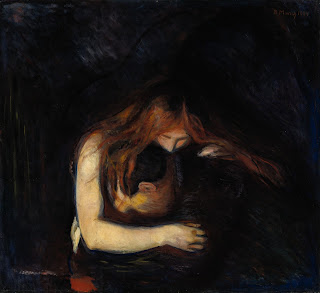 Evie Byrne is the author of three hot vampire romances: Called by Blood, Bound by Blood and Damned by Blood. Link. In the spirit of full disclosure, she admits that while two of her heroines are down-to-earth, regular humans, her third heroine is a vampire who is as wicked as the day is long.

Anyone have any comments on female vampire characters?

Victoria Janssen [she, her] currently writes cozy space opera for Kalikoi. The novella series A Place of Refuge begins with Finding Refuge: Telepathic warrior Talia Avi, genius engineer Miki Boudreaux, and augmented soldier Faigin Balfour fought the fascist Federated Colonies for ten years, following the charismatic dissenter Jon Churchill. Then Jon disappeared, Talia was thought dead, and Miki and Faigin struggled to take Jon’s place and stay alive. When the FC is unexpectedly upended, Talia is reunited with her friends and they are given sanctuary on the enigmatic planet Refuge. The trio of former guerillas strive to recover from lifetimes of trauma, build new lives on a planet with endless horizons, and forge tender new connections with each other.
View all posts by Victoria Janssen →
This entry was posted in guest, vampires, women. Bookmark the permalink.

10 Responses to "On the Female Vampire," Evie Byrne Guest Post