More on my most recent re-read of Mansfield Park, from several years ago. 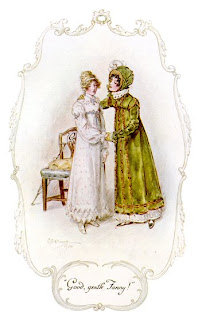 I had a couple more thoughts on the rereading I’ve done so far. First, Edmund criticizes the behavior of Mary Crawford and blames her upbringing for it; but he never makes the same point about his brother and sisters, who also exhibit poor judgement on several occasions. He does not approve of them acting, or of the play they choose, but he does not bring his mother into the argument at all, even though she is present and his father is not. And in the end, Edmund goes along with his siblings.

Edmund feels entitled to direct Fanny’s behavior, but not that of his siblings, so in that way he treats her as poorly as Mrs. Norris does; Fanny goes along with him, but when they met she was much younger, and very alone, and received no attention from anyone else.

The text of the play Lover’s Vows which the characters in Mansfield Park plan to enact is very enlightening, if you’ve never read it before. 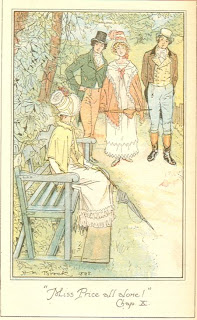 No one in this book understands anyone else; the only two people who are shown to have perfect felicity are Fanny and her brother William, but their bond does not depend entirely upon understanding of each other to flourish, and their times together, though intense, are widely separated while William is at sea. Fanny understands Edmund except in his feelings about Mary Crawford. Edmund, though he shares many opinions with Fanny, doesn’t understand her feelings against Henry Crawford at all. Sir Thomas wishes Fanny to be happy, but he doesn’t take the trouble to find out what that would really entail; his own thoughts on the matter are sufficient. Fanny is the poor relation in this as in everything else.

While Mary encourages Fanny to marry her brother, she uses as examples two marriages that did not end felicitously, with seeming disregard for how this reflects on the advice she’s dispensing; she’s too full of the vision of romance, not only where her brother is concerned but also blocked by her romantic feelings toward Edmund.

Everyone in this book is self-absorbed in one way or another.