My final notes on my last re-read of Mansfield Park. 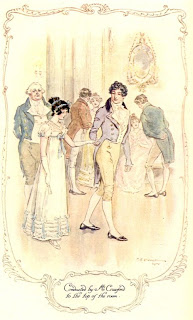 After finishing my reread I confess I’m a bit puzzled about Henry Crawford. Either he was a great actor (it is a plot point that he is a good actor) and managed to fool not only Fanny and Edmund but his own sister, or he’s simply inconsistent. I could believe him flirting with the Bertram sisters and playing them off of each other for his own rakehell amusement. I could also buy him trying to change by falling for Fanny, even if that change was not to be permanent. What I didn’t buy was that, so suddenly after he’d made headway with Fanny, that he should throw her over and run off with Maria Bertram. After all the effort he’d expended? Even if he’d wanted to make Fanny suffer, he did so in a way that meant he wasn’t there to observe it. So far as the book tells you, nobody sees him again, once he and Maria go their separate ways. I feel he’s more the slave of the plot than anything else. I felt Austen might have had her tongue in her cheek about Henry, making him a caricature of the Wicked Seducer.

The last chapter, in which Austen narrates how the various characters ended up, amused me greatly. She seemed so obviously to be playing, reinforcing the moral lessons discussed throughout the novel by Edmund and Fanny, and doing so just in the manner that would please her readers, at least those who were reading the novel for those very reasons.

I am pretty sure this will never be my favorite Austen novel, but I’ve enjoyed the reread.

Does anyone else have any comments on Mansfield Park?