Please welcome my guest Jeannie Lin, Golden Heart finalist for her historical romance novel Butterfly Swords, which has, as of 7/15/09, sold to Harlequin Mills and Boon! 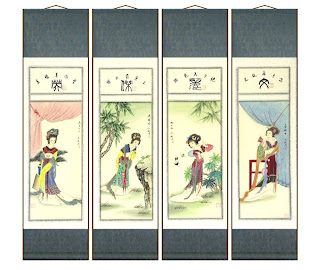 My muses — four extraordinary women of the Tang dynasty. The characters at the top of each panel mean roughly: literacy, beauty, domination, heroism.

Feminism in the Tang Dynasty: The Footbinding Dilemma

I write historical romances set in Tang dynasty China. The period has always fascinated me: court intrigue, sensual silk costumes and dashing swordplay. But readers want historical accuracy and because this period is not well known to romance, I have received this one question so many times in contests and critiques: How can these strong, independent women exist in a society that dictated women’s feet were bound at an early age so they could barely walk?

The answer is easy historically, but not so easy on the written page when a reader doesn’t have the benefit of Google at their fingertips. Footbinding was not adopted until more than a hundred years after my story takes place and was only then practiced by a small portion of society. But how do I convey that within the context of the story? Because it hasn’t happened yet, I can’t even drop in some convenient infodumping to take care of it.

Each historical time period has its own challenges, its own “footbinding dilemma.” The challenge that every historical romance author has to face when writing for today’s women is the question of how believable are these feisty, headstrong heroines who seem to fly in the face of convention for their time? Many popular historical periods are male-dominated eras when women were allowed less freedom in society. Of course there are icons of feminine empowerment throughout all periods and across all cultures, but these are held up as exceptional women who defied convention and broke the mold. But I contend that the strong historical female is less of the exception than people believe.

It’s actually very easy to make that argument for the time period that I write in. The Tang Dynasty (618 A.D. – 907 A.D.) spanned three hundred years and is not only considered a Golden Age of Chinese civilization, but also a period of uncommon liberation for women.

Written records indicate that women not only were involved in business transactions, but held the highest offices in the empire. The most notable being Empress Wu Zetian, who eventually took on the title of Emperor and founded her own dynasty. Under her rule, her personal secretary, Shangguan Wan’er gained fame as a talented poet and writer and served as one of the most powerful ministers in the court. After Wu Zetian’s death, her daughter, Princess Tai Ping, and her scheming daughter in-law battled for power in the imperial court. Early Chinese history has women like Hua Mulan, Li Xiu and Liu Jinding fighting battles and leading armies. Notice how there’s much more than the one “Mulan” that we’ve heard about in Western culture, courtesy of Disney. 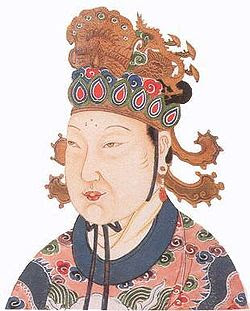 The interesting thing is that the Chinese heroine was already an icon during ancient times. She wasn’t romanticized by future, more liberated historians. There’s a reason you see so many females in movies as kick butt, kung fu hotties. Because they really were out there, appearing in legends and historical accounts from as early as 500 BC. The Chinese invented paper — they wrote all this down.

With so many fiery women to serve as role models for my heroines, it’s no wonder the Tang dynasty is such a muse for me! Considering the tradition and historical details, I find it very believable that my heroine Ai Li could forge her own path through the empire armed with a pair of butterfly swords. It’s one of my deepest wishes to share a piece of the glory that was. It wasn’t all about subjugation and footbinding. Historical research provides a richer, much more exciting picture of women through the ages.

But all the research in the world doesn’t matter if the writing can’t convince readers.

Writers need to deal with the commonly held view that women were marginalized throughout history. Knowing the facts does not exclude us from having to craft authentic characters and believability comes down to the very intimate relationship between the reader and the words. Which brings me back full circle. How did I solve the footbinding dilemma?

I concentrated on improving my writing until, hopefully, this one roadblock wouldn’t stop a reader from being sucked into the story. In the end that’s all we can do. Write a compelling story that convinces people these characters are flesh and blood and real. Isn’t that what history is anyway? The accepted version of the story that got written down. And don’t tell me that recorded history, the serious textbook stuff, doesn’t always have a touch of romance.

Victoria Janssen [she, her] currently writes cozy space opera for Kalikoi. The novella series A Place of Refuge begins with Finding Refuge: Telepathic warrior Talia Avi, genius engineer Miki Boudreaux, and augmented soldier Faigin Balfour fought the fascist Federated Colonies for ten years, following the charismatic dissenter Jon Churchill. Then Jon disappeared, Talia was thought dead, and Miki and Faigin struggled to take Jon’s place and stay alive. When the FC is unexpectedly upended, Talia is reunited with her friends and they are given sanctuary on the enigmatic planet Refuge. The trio of former guerillas strive to recover from lifetimes of trauma, build new lives on a planet with endless horizons, and forge tender new connections with each other.
View all posts by Victoria Janssen →
This entry was posted in guest, historical fiction, research, romance novels. Bookmark the permalink.