If you have a chance, check out Werewolves At Home, a webcomic tie-in to The Moonlight Mistress.

This is a list of werewolf books that I’ve liked a lot or had recommended to me. Suggestions welcome!

(alternate title: Bareback) by Kit Whitfield is one of the most original werewolf novels I’ve ever read. There’s a romance, but this isn’t a romance novel (so don’t expect a happy ending). If not for the werewolves, I would call it mainstream or noir suspense. The world of the novel is filled with werewolves, and on moon nights the only ones who can police the lunes are “barebacks,” humans who through a genetic accident cannot change form. Lunes lock themselves up on moon nights, or are supposed to make their way to designated shelters, but what about the children with no oversight? The drunks who can’t find their way to a lockup? The lunes who like running free and don’t care if they hurt someone? 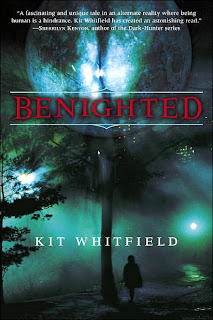 by Annette Curtis Klause. This one’s Young Adult. Interestingly, the heroine is the werewolf; she is wrestling with her love for a human boy, and whether he can accept her wolf-self.

Kitty and the Midnight Hour

by Carrie Vaughn. This urban fantasy series is still going on, and I’m still enjoying it – recently, Vaughn added some new plot elements that I think gave the series new life. What I like best about it is Kitty’s radio show, which despite its supernatural discussion topics, feels absolutely real to me. I also loved, in the first book, Vaughn’s take on pack dynamics.

by Wen Spencer is not quite a werewolf novel, but it sort of is at the same time. It has some really wacky stuff in it, nothing like anything else out there, and I recommend it for that reason.

Finally, Lycanthia or Children of the Wolves

by Tanith Lee is fantasy, and thick with gothic atmosphere and her complex, unique prose. I didn’t actually like the protagonist much, but this is a great read for when you’re bundled up in a blanket, occasionally staring out a snowy window.

Victoria Janssen [she, her] currently writes cozy space opera for Kalikoi. The novella series A Place of Refuge begins with Finding Refuge: Telepathic warrior Talia Avi, genius engineer Miki Boudreaux, and augmented soldier Faigin Balfour fought the fascist Federated Colonies for ten years, following the charismatic dissenter Jon Churchill. Then Jon disappeared, Talia was thought dead, and Miki and Faigin struggled to take Jon’s place and stay alive. When the FC is unexpectedly upended, Talia is reunited with her friends and they are given sanctuary on the enigmatic planet Refuge. The trio of former guerillas strive to recover from lifetimes of trauma, build new lives on a planet with endless horizons, and forge tender new connections with each other.
View all posts by Victoria Janssen →
This entry was posted in reading, recommendations, sf/f, werewolves. Bookmark the permalink.