Today I had the happiness of introducing people to each other because they ought to have known one another already but didn’t. (I think I got those tenses right…I’m really tired!) I first met up with erotica writer Sacchi Green, whom I met many years ago at a reading for Best Lesbian Erotica, in which we both had stories. We wandered the floor and I got to see things from a different perspective: she owns two stores, that sell some books but also a lot of subsidiary items such as stuffed animals, magnetic poetry, and novelties. I got to see a little of how her buying decisions were made and learn how those companies (such as Folkmanis, makers of stuffed animals and puppets) operate. We had an early lunch and I introduced Sacchi to Meredith Schwartz; both of them have edited erotic anthologies, and both write erotica as well. Later, I introduced Sacchi to a publishing friend who lives near her, and who’s actually been to her store; they’d never managed to meet before. 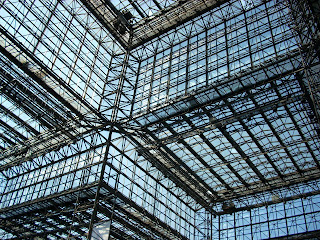 After leaving Sacchi, I met with my agent for a drink and then wandered the floor for a while with friend Cecilia Tan; we went together to visit a mutual friend, Keith DeCandido, who was signing comics. I hadn’t realized some of Cecilia’s books that were coming out in print this fall actually had a display! So we walked over to the Red Wheel booth and I took pictures of her with them (you can see one in the previous post).

Now, I’m off to dinner with some local friends. It’s been a fun conference!