Sex for the Oppositional

I’m sure I’ve seen another discussion, somewhere on the Internet at somewhen, a discussion of villains and sex. If I could remember where or when, I would hunt it up and post the links for your reading pleasure. But since I can’t, I’ll just ramble in my usual fashion. 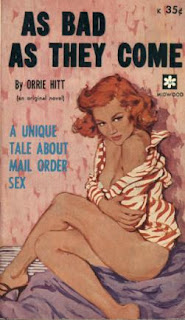 The villain of a story doesn’t necessarily need to be Evil. They usually have more depth if they’re like everyone else, and don’t think of themselves as bad. There are villains in romance novels, and in erotica. Often, if the villian has sex, it’s not ordinary sex. It’s evil sex. Or cruel sex. Or sex that just isn’t very good.

Villains–or perhaps we should call them “Oppositional Characters”–need love more than the main pairing who are, after all, guaranteed a happy ending most of the time.

I know you’re asking, “What can I do? How can I help these poor, lonely characters?”

You don’t need to invite them into your home, or even donate money. Simply give them a chance! Or at the very least, a nice new sex toy that they and their partners will enjoy. Let these characters find a little tenderness as they strive to destroy the protagonist’s happiness, or the world. Remember, Oppositional Characters need love, too.

Victoria Janssen [she, her] currently writes cozy space opera for Kalikoi. The novella series A Place of Refuge begins with Finding Refuge: Telepathic warrior Talia Avi, genius engineer Miki Boudreaux, and augmented soldier Faigin Balfour fought the fascist Federated Colonies for ten years, following the charismatic dissenter Jon Churchill. Then Jon disappeared, Talia was thought dead, and Miki and Faigin struggled to take Jon’s place and stay alive. When the FC is unexpectedly upended, Talia is reunited with her friends and they are given sanctuary on the enigmatic planet Refuge. The trio of former guerillas strive to recover from lifetimes of trauma, build new lives on a planet with endless horizons, and forge tender new connections with each other.
View all posts by Victoria Janssen →
This entry was posted in erotica, romance novels, writing. Bookmark the permalink.

5 Responses to Sex for the Oppositional