Back when I first posted about promotional bookmarks and postcards for The Duke & The Pirate Queen, I promised to give an update on how it was going. So, here’s how it’s going…sort of. 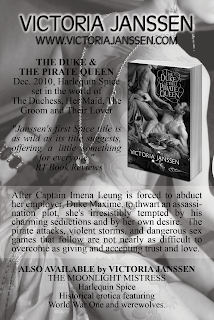 I don’t actually know yet how it’s going. I carried quantities of the bookmarks and postcards with me to the RWA conference and to Readercon, and left them on the freebie tables. People took them. I had taken far too many to RWA, so I collected most of the leftovers before I left on Saturday, but a lot of them had still been taken. Several people told me they’d seen my materials and said how beautiful they were, so that was nice feedback.

Once home, I began preparing packages of the promotional materials to send out. First on the list was a bookstore owner who’d actually contacted me via email, and second was a librarian I’d met at RWA; she’d given me her card. I also collected a few librarian and bookstore addresses from various sources on the internet: people who’d recently won awards from RWA, and specialty bookstores who looked as if they might be interested. In the weeks since, I’ve been gradually preparing envelopes for each of those venues, including a handwritten letter in each one, to ask if they are willing to distribute the materials for me. I’m not expecting to hear back from them; I just hope they have a use for what I’ve sent. Ziplock bags inside of flat-rate priority mail envelopes have been my method so far.

The best thing, so far, about having these materials is that I, well, have them. I was able to give them to people I talked to, and in some cases the bookmark seemed more appropriate than giving them my business card. The materials also served as conversation pieces, as anything with my covers tends to do, thanks to Harlequin.

I will be bringing more bookmarks and postcards to the fall conventions I plan to attend. If you’d like me to send some to you, or to your local bookstore or library, please comment or email me.

If I get any additional feedback, I’ll report!