I’ve begun basic research on the history of the American West for a western steampunk novel. My book isn’t going to be a historical, but I want it to be informed by history and in dialogue with history. 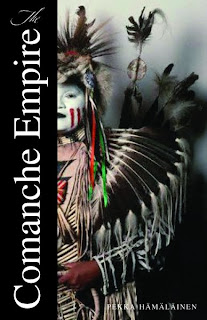 I chose Frontiers: A Short History of the American West as my basic overview book.

The Encyclopedia of North American Indians: Native American History, Culture, and Life From Paleo-Indians to the Present was recommended by Debbie Reese at her blog, American Indians in Children’s Literature.

Peoples of Color in the American West is a textbook and has a lot of material that’s more modern than I need, but I think it will be a good guide to further resources.

I chose The Comanche Empire partly just because I wanted to read it!

Check out its awesome reviews. “In the eighteenth and early nineteenth centuries, at the high tide of imperial struggles in North America, an indigenous empire rose to dominate the fiercely contested lands of the American Southwest, the southern Great Plains, and northern Mexico. This powerful empire, built by the Comanche Indians, eclipsed its various European rivals in military prowess, political prestige, economic power, commercial reach, and cultural influence. Yet, until now, the Comanche empire has gone unrecognized in historical accounts.” So far, this book is just as incredibly cool as it sounds.

If you’ve got any more book suggestions for me, please comment!

Victoria Janssen [she, her] currently writes cozy space opera for Kalikoi. The novella series A Place of Refuge begins with Finding Refuge: Telepathic warrior Talia Avi, genius engineer Miki Boudreaux, and augmented soldier Faigin Balfour fought the fascist Federated Colonies for ten years, following the charismatic dissenter Jon Churchill. Then Jon disappeared, Talia was thought dead, and Miki and Faigin struggled to take Jon’s place and stay alive. When the FC is unexpectedly upended, Talia is reunited with her friends and they are given sanctuary on the enigmatic planet Refuge. The trio of former guerillas strive to recover from lifetimes of trauma, build new lives on a planet with endless horizons, and forge tender new connections with each other.
View all posts by Victoria Janssen →
This entry was posted in research, steampunk, western. Bookmark the permalink.