Stop by tomorrow for my guest, Evangeline Adams of Edwardian Promenade, who posts about writing African-American romance. 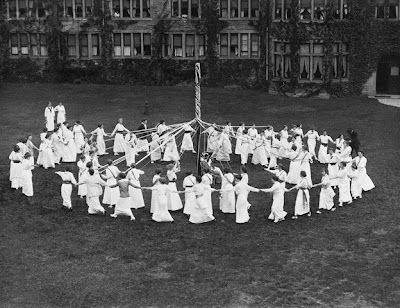 “Never had the Maypole been so gayly decked as at sunset on midsummer eve. This venerated emblem was a pine-tree, which had preserved the slender grace of youth, while it equalled the loftiest height of the old wood monarchs. From its top streamed a silken banner, colored like the rainbow. Down nearly to the ground the pole was dressed with birchen boughs, and others of the liveliest green, and some with silvery leaves, fastened by ribbons that fluttered in fantastic knots of twenty different colors, but no sad ones. Garden flowers, and blossoms of the wilderness, laughed gladly forth amid the verdure, so fresh and dewy that they must have grown by magic on that happy pine-tree. Where this green and flowery splendor terminated, the shaft of the Maypole was stained with the seven brilliant hues of the banner at its top. “

“…and now, disengag’d from the shirt, I saw, with wonder and surprise, what? not the play-thing of a boy, not the weapon of a man, but a maypole of so enormous a standard, that had proportions been observ’d, it must have belong’d to a young giant. “

–from Fanny Hill by John Cleland

Victoria Janssen [she, her] currently writes cozy space opera for Kalikoi. The novella series A Place of Refuge begins with Finding Refuge: Telepathic warrior Talia Avi, genius engineer Miki Boudreaux, and augmented soldier Faigin Balfour fought the fascist Federated Colonies for ten years, following the charismatic dissenter Jon Churchill. Then Jon disappeared, Talia was thought dead, and Miki and Faigin struggled to take Jon’s place and stay alive. When the FC is unexpectedly upended, Talia is reunited with her friends and they are given sanctuary on the enigmatic planet Refuge. The trio of former guerillas strive to recover from lifetimes of trauma, build new lives on a planet with endless horizons, and forge tender new connections with each other.
View all posts by Victoria Janssen →
This entry was posted in holiday. Bookmark the permalink.