I’ve been pondering options for promotional items I could give away that would be related to The Duke and the Pirate Queen. I would really, really like some input into these ideas, so please feel free to comment at length. 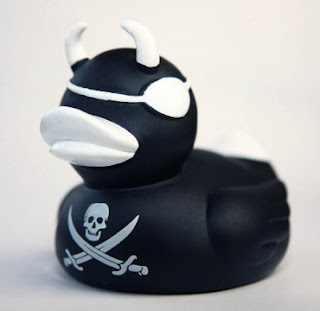 Here are my ideas so far:

1. The usual suspects – postcards or bookmarks. Bo-ring, or usual because they work?

2. Temporary tattoos, which would fit in with the pirate idea. Except, tattoos of what exactly? Are they any use as promotional items if they don’t include the book title?

3. Pirate duckies. Possibly with labels stuck on, so one could then lose the labels and forget where the duckies came from. But oh so cute.

4. A single large giveaway of “pirate loot,” which would entail getting entrants to email me and then drawing a name. Would people just enter and forget? I think people would enter even if they had zero interest in the book.

5. Something else. Feel free to enlighten me on possible answers to this one.

Victoria Janssen [she, her] currently writes cozy space opera for Kalikoi. The novella series A Place of Refuge begins with Finding Refuge: Telepathic warrior Talia Avi, genius engineer Miki Boudreaux, and augmented soldier Faigin Balfour fought the fascist Federated Colonies for ten years, following the charismatic dissenter Jon Churchill. Then Jon disappeared, Talia was thought dead, and Miki and Faigin struggled to take Jon’s place and stay alive. When the FC is unexpectedly upended, Talia is reunited with her friends and they are given sanctuary on the enigmatic planet Refuge. The trio of former guerillas strive to recover from lifetimes of trauma, build new lives on a planet with endless horizons, and forge tender new connections with each other.
View all posts by Victoria Janssen →
This entry was posted in business of writing, promo, the duke. Bookmark the permalink.