Teaser from The Duke & The Pirate Queen

Today, I give you a tiny teaser from The Duke & the Pirate Queen

Maxime heard the ship’s bell ring two quarter hours before the cabin’s door opened again. The cabin girl, Norris, poked her head in, then slid around the door and shut it behind her, reaching for a basket on the deck. When she saw Maxime, she stopped and looked at him incredulously.

“Is this your rope?” Maxime asked, mildly. 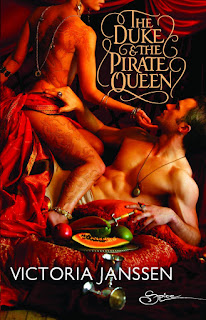 Her mouth opened, then closed.

“You can have it back, if you like. Though I’m afraid you’ll have to untie it from me yourself.”

Norris clutched the basket to her flat chest. “I…the captain borrowed it? My line?”

“You’ll have to ask her about untying it, then.” Norris grinned and slipped out again, this time with the basket.

Maxime cursed, but without much vigor. He returned to trying to lift his feet. The deck braces to which he was hitched showed no hint of movement and the sturdy decking didn’t even creak, no matter how hard he pulled. The knots on his wrists, he’d quickly learned, drew tighter if he struggled, and there was no accessible end for him to attack with his teeth.

“Being kidnapped,” he said, “is much more dull than I would have expected.” Perhaps things would improve once the ravishing began. If it began. He was beginning to have his doubts.

Victoria Janssen [she, her] currently writes cozy space opera for Kalikoi. The novella series A Place of Refuge begins with Finding Refuge: Telepathic warrior Talia Avi, genius engineer Miki Boudreaux, and augmented soldier Faigin Balfour fought the fascist Federated Colonies for ten years, following the charismatic dissenter Jon Churchill. Then Jon disappeared, Talia was thought dead, and Miki and Faigin struggled to take Jon’s place and stay alive. When the FC is unexpectedly upended, Talia is reunited with her friends and they are given sanctuary on the enigmatic planet Refuge. The trio of former guerillas strive to recover from lifetimes of trauma, build new lives on a planet with endless horizons, and forge tender new connections with each other.
View all posts by Victoria Janssen →
This entry was posted in free read, promo, the duke. Bookmark the permalink.

3 Responses to Teaser from The Duke & The Pirate Queen