I was most amused to find the hotel had changed one of the mens’ bathrooms into a womens’ bathroom, and as part of the repurposing, they draped and decorated the urinals with flowers and boxes of tissues, so our maidenly eyes would not be offended. 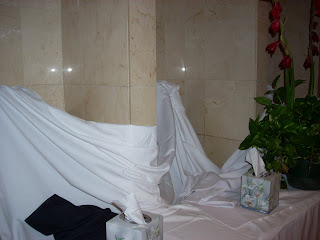 Thursday at the conference seemed to last for a really long time and involve a lot of wandering around the hotel trying to find things and people. I woke, too early, and realized I’d solved a problem with the current novel; then I fell back asleep. I slept late, very unusual for me, and just barely had a chance to get a latte and a pastry before I was due to help set up for the Keynote Luncheon. I called this being a “books-on-chairs flunky” because I, you guessed it, put books on chairs. A lot of books on a lot of chairs. We ran out of books before we ran out of chairs, and had to move some books from the back tables to the front tables. 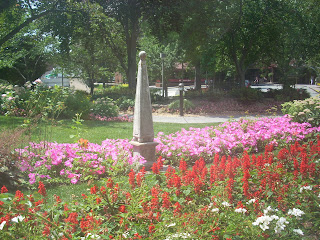 After, I decided to stay for the luncheon itself along with roommate Emily Ryan-Davis and some other Divas, and ended up having a nice conversation with historical author Lauren Willig, whom I met for the first time. She writes in the early Napoleonic Wars period, so I’ll have to seek out her books. I ran into Lucienne Diver and we had a brief sitdown with coffee to catch up on non-publishing things, then I found…a bunch of folks, in sequence, among them Kate Pearce and Crystal Jordan, and I was able to meet Louise Edwards for the first time.

I went to at least some of the book signings; in line, I got to meet blogger Azteclady, who is fun, and as in San Francisco last year, author Elizabeth K. Mahon and I stalked each other. I was collecting books for the Romance Divas “Not Going to Conference Conference” giveaway. I also got, for my own pleasure, a signed copy of Anna Campbell’s Untouched.

My sense of time is rather confused, but at various times I ran into the D.C.-area authors whom I knew already from the local CapClave sf/f convention–Mindy Klasky and Maria Snyder. Mindy gave me a ribbon for her new series, and I put it on my badge holder, but it fell off at some point during the day. 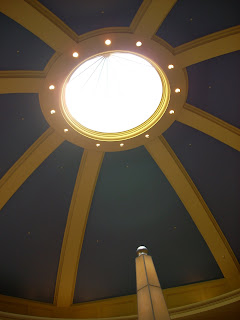 Thursday afternoon, I had a scheduled meeting with my editor, Lara Hyde. We’d never met in person, but I had a description of her. I met the wrong person (who fit the description) first–we were both looking for someone we didn’t know! Then Lara and I found each other, and ventured out of the hotel for ice cream and a brief chat. I then left Lara and went down the road for a party held by my RWA chapter, Passionate Ink. By this time, it was pretty hot outside, and I’d made the mistake of wearing a red silk jacket over my shirt. I caught a cab for what normally would have been an easy ten to fifteen minute walk. I was a little late for the party and thus didn’t get a chance to talk to very many people, but did get to chat with Meagan Hatfield before the speeches began. I was sitting in a section of the pub that didn’t have good air circulation, so I became a little dazed for a while. 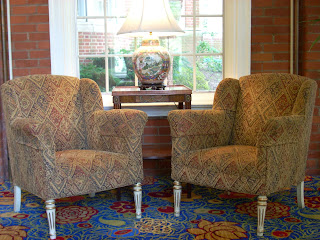 After getting back from the PI party, I was hot and tired. I retreated to my room for a bit. There I met up with one of my roommates, Emily Ryan-Davis, and convinced her to accompany me to E-Harlequin’s Pajama Party, which featured lots and lots of chocolate on the tables. We ended up having an excellent time there, having a lovely chat with Francis Ray (whom I met last year) and her daughter, and hitting it off with Nocturne Bites author Lydia Parks. The conversation was so good, I ended up eating Kit Kat bars while drinking a whiskey sour, which ought to have been really, really nasty…but I suffered no ill effects.

The next morning, the toilet exploded! Tune in tomorrow!