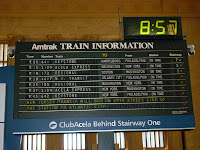 I began my trip to D.C. for RWA Nationals on Wednesday morning at 30th Street Station in Philadelphia. I spent the time before my track was announced in snapping pictures of the station’s architecture; I’m there often, but rarely with a camera in my hand; the angel statue is especially photogenic. Remember it at the beginning of the film Witness? I took the Amtrak train, which is a comfortable way to travel, especially for such a short trip. My only difficulty was getting my larger-than-usual suitcase into the overhead luggage rack. Once I’d settled into my seat, I dozed on and off all the way to D.C. 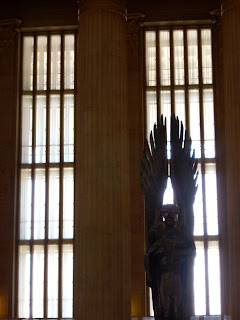 The beautiful Union Station was my next stop. I didn’t stay there long; I immediately hopped on the Metro and made my way to the conference hotel, which was down the road from the National Zoo. I wish I’d had time to skip out and visit the zoo; it’s been several years since my last visit. 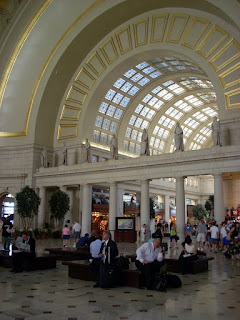 At the hotel, there were some difficulties in getting rooms due to a massive checkout from the previous convention, so I registered for the conference, then went to eat lunch in the hotel restaurant, dragging my luggage behind me. I shared a table with a stranger, Sharon, and just like last year when I shared a dinner table with strangers, we had a great conversation about romance writing and publishing, and by the end of lunch weren’t strangers any longer. I returned to the front desk and discovered one of my roommates had managed to get us a room, so I was able to drop off my luggage and have an early dinner with Jennifer Stevenson, at an excellent Thai restaurant across the street; I had an excellent fried tofu in a creamy red curry sauce. I’m really glad we did that, since we had trouble meeting up for long during the rest of the conference, due to conflicting schedules and poor cell phone reception in various parts of the hotel.

Wednesday night was the Literacy Signing, my first as a participant. I’d signed up mainly so people could find me, and this worked wonderfully–also, a few strangers came to buy the book or tell me they’d liked it, which was lovely. And I met Wendy the Super Librarian! I sat between Marcia James and Carolyn Jewel, and within sight of Beverly Jenkins and C.S. Harris; I slipped over before the signing to tell her how much I was enjoying her period mysteries. The only scary moment was when the doors first opened and a tidal wave of people swept into the room. I got rid of my bowl of Lindt truffles in a bit over an hour, but that was nothing compared to Marcia James, who handed out seemingly a hundred tiny pairs of handcuffs attached to her business card.

After the signing, I roamed the room meeting a few more authors who were still at their tables, including my friend Christine Merrill, and Victoria Dahl whom I knew from Twitter. I then headed across the street to Medaterra to meet members of the Romance Divas forum. This was a bit overwhelming, as there were a lot of people and the people constantly circulated. By this point, I was far too overstimulated to do much but try to put faces to names, and soon had to reel off to my room and sleep.