The Book of Awesome

Today I bring you The Book of Awesome.

The Book of Awesome is why you should have friends. A short while ago, I was bemoaning the fact that I had read the Hornblower books and the Aubrey-Maturin books, and was writing a sea adventure, but didn’t really understand how sailing ships actually worked. 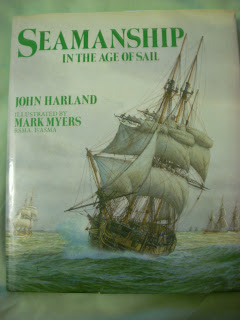 Sherwood Smith, whom I’ve known online for several years, said, “You need Seamanship in the Age of Sail: An Account of the Shiphandling of the Sailing Man-Of-War 1600-1860, Based on Contemporary Sources by John Harland.” Despite having read Sherwood’s book Inda when it came out, I had completely forgotten that the book included sea adventure, thus I had not approached her for help with research. However, my complaint about my problem brought her to my rescue, and I was able to obtain The Book of Awesome. 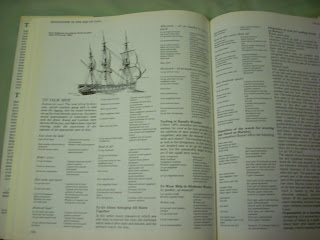 How awesome is The Book of Awesome? So awesome, I cannot tell you. I am speechless in the face of its awesomeness. In fact, it is so awesome and gives such detail that at times I wish I could spend a few months studying it in detail. Or maybe years. 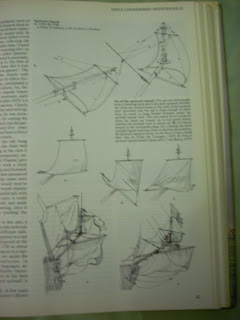 The Book of Awesome tells you the names of all the parts of the ship and the various sails, often in many different European languages. It tells you how those sails can be worked, and what they look like under different conditions, and how they would be adjusted for those conditions, and why this was done. It has diagrams. I cannot stress enough how totally awesome this book is. I particularly love that it was written by a man who lives in a town that is totally landlocked (though the illustrator had experience with working sailing ships). 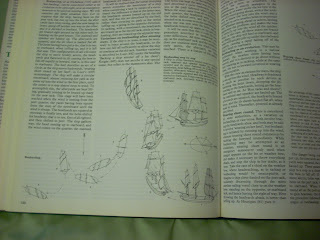 It’s a perfect book for a giant research geek like me. Because actually, The Book of Awesome is way too awesome for my needs. I imagine some readers of my sea adventure/pirate book will enjoy the ship geekery, but some won’t notice it at all, and others will wonder why I have to talk about ships so much. I can’t include so much detail that the novel starts to be about ships and not about the characters. But it doesn’t matter. The research part of it is for me.

I love my Book of Awesome.

Stop by tomorrow for my guest, Cecilia Tan, who’ll be posting on “Why Writing Romance and Erotica is Like Being Good in Bed.”

Victoria Janssen [she, her] currently writes cozy space opera for Kalikoi. The novella series A Place of Refuge begins with Finding Refuge: Telepathic warrior Talia Avi, genius engineer Miki Boudreaux, and augmented soldier Faigin Balfour fought the fascist Federated Colonies for ten years, following the charismatic dissenter Jon Churchill. Then Jon disappeared, Talia was thought dead, and Miki and Faigin struggled to take Jon’s place and stay alive. When the FC is unexpectedly upended, Talia is reunited with her friends and they are given sanctuary on the enigmatic planet Refuge. The trio of former guerillas strive to recover from lifetimes of trauma, build new lives on a planet with endless horizons, and forge tender new connections with each other.
View all posts by Victoria Janssen →
This entry was posted in pirates, research. Bookmark the permalink.