Why I Love the Marriage of Convenience Plot

The “marriage of convenience” plot in historical romance might focus on an arranged marriage, but more typically, shenanigans are involved; the couple marries to save the heroine from ruin at the hands of a dastardly plotter, or to ensure the hero or heroine receives an inheritance, or because money is needed to avoid disgrace by covering the transgressions of a family member. Occasionally, though, the plot is as simple as a man of good fortune being in want of a wife, as in Georgette Heyer’s The Convenient Marriage. 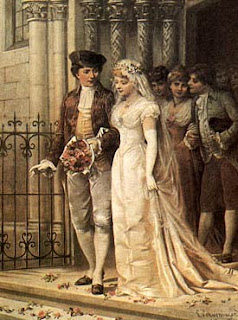 As a reader, I don’t particularly care how the marriage happens, so long as it happens quickly, so the real plot of the novel can begin. What I enjoy about this plot is that the hero and heroine are forced to work together and create a meaningful relationship out of nothing. There may be an attraction between the two before the marriage, or one character may harbor a secret passion for the other, but once they are married, their fate is inescapable. They must make a life together or forever live unhappy.

The potential tensions in a marriage of convenience are myriad. Given a historical setting, the woman is potentially in grave danger once she places herself under the legal protection of a man. Depending upon marriage settlements, she might lose both money and property in the bargain. She gives him rights over her that could lead to her death. The hero has more social freedom to seek a lover outside marriage, if needed, but at the same time, any child his wife bears within the marriage is assumed to be his own, so he risks someone else’s child inheriting his property. If his wife is barren or he abandons her, his property might go to a distant or hated relative.

Less dramatically, the heroine of the novel might be a virgin or might not, but regardless, sex with her new husband is an integral part of their marriage. If they are new to each other, all the tensions of a “first time” apply; if they were previously friends or acquaintances, having sex with each other will still be alien territory. For example, there’s a scene in Dorothy Sayers’ Gaudy Night in which the heroine watches the hero while he sleeps. They’ve known each other for years, been friends and worked together, but this is the first time she’s been sexually attracted to him and admits it to herself. After that point, everything between them changes, and nothing; it’s a fascinating tipping point.

Similarly, the tipping point between friends and lovers is often key in a marriage of convenience plot. When will it happen? And how?

And it might be reappearing in a different form in paranormal romance. Check out Crystal Jordan’s guest post on paranormal mate bonds.

Victoria Janssen [she, her] currently writes cozy space opera for Kalikoi. The novella series A Place of Refuge begins with Finding Refuge: Telepathic warrior Talia Avi, genius engineer Miki Boudreaux, and augmented soldier Faigin Balfour fought the fascist Federated Colonies for ten years, following the charismatic dissenter Jon Churchill. Then Jon disappeared, Talia was thought dead, and Miki and Faigin struggled to take Jon’s place and stay alive. When the FC is unexpectedly upended, Talia is reunited with her friends and they are given sanctuary on the enigmatic planet Refuge. The trio of former guerillas strive to recover from lifetimes of trauma, build new lives on a planet with endless horizons, and forge tender new connections with each other.
View all posts by Victoria Janssen →
This entry was posted in genre, historical fiction, reading, romance novels. Bookmark the permalink.

3 Responses to Why I Love the Marriage of Convenience Plot