Fear of Kindle: Don’t Bet Against the Paper Barons and How Newspapers Will Survive, both by science fiction author and music critic Tom Purdom.

I can totally get into the Harvard Bookstore’s new bookmaking robot, known to friends as “Paige M. Gutenborg.” I mean, it’s a robot. How cool is that? Now if the robot could write books, too, that would be something, and we’d really be living in the future. Here’s what you can get so far. 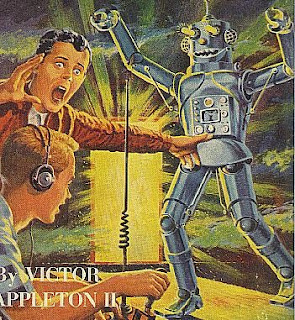 Luddite that I am, I doubt I will ever buy a vook, but the idea is kind of cool and science-fictiony. Even though the name is so silly I’m having trouble taking it seriously. The concept sounds similar to online games – maybe if they did a vook of Leather Goddesses of Phobos I’d be more interested! Or perhaps vooks of slipstream fiction might be appropriate. Here’s an enthusiastic article at The Creative Penn about possible uses for the vook.

And now for something completely different. A friend pointed me towards these awesome puzzles. I’m particularly fascinated by the Rombix – the one I played with was irresistible because of the bright colors and smooth pieces that felt lovely in my hand, but the enormous, expensive ones are also horribly tempting, and make me wish I had a house with a library, where I would display them on lovely polished tables where guests could play with them.

Victoria Janssen [she, her] currently writes cozy space opera for Kalikoi. The novella series A Place of Refuge begins with Finding Refuge: Telepathic warrior Talia Avi, genius engineer Miki Boudreaux, and augmented soldier Faigin Balfour fought the fascist Federated Colonies for ten years, following the charismatic dissenter Jon Churchill. Then Jon disappeared, Talia was thought dead, and Miki and Faigin struggled to take Jon’s place and stay alive. When the FC is unexpectedly upended, Talia is reunited with her friends and they are given sanctuary on the enigmatic planet Refuge. The trio of former guerillas strive to recover from lifetimes of trauma, build new lives on a planet with endless horizons, and forge tender new connections with each other.
View all posts by Victoria Janssen →
This entry was posted in business of writing, links. Bookmark the permalink.