Have His Carcase – Peter Wimsey on tv

I’m guestblogging today over at Crista McHugh’s blog, on “Take All Chances.”

Have His Carcase stars Edward Petherbridge as Peter Wimsey. The production is notable, for me, for the excellence of the sexual tension portrayed by Petherbridge and Harriet Walter, who plays Harriet Vane. Some of it arises from the book, most importantly their big fight, which can be summed up as “saving a woman from the gallows can put a big damper of your hopes of getting matrimonially laid.” That scene in this adaptation is splendidly acted, especially by Petherbridge, who ranges from hurt to rage to a dreadful, sad weariness in less than five minutes. For that scene alone, this DVD is worth it. 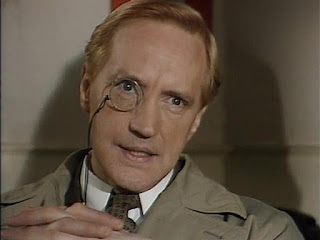 There is demonstration of how Peter feels about Harriet which is mostly skimmed over or ignored in the novel; in the television adaptation, you see him touch her, more than once, but always in circumscribed ways. They dance in the novel, but the actors show desperation in the way Harriet pulls away from Peter before the dance is concluded. A lighthearted discussion of marriage proposals becomes less lighthearted, and Peter’s joking hand on Harriet’s knee attains new significance. In the final scene, Peter takes Harriet’s hand and kisses her wrist, between glove and sleeve, a deeply sensual gesture that shows us all we need to know.

I think about how that kind of body language could be applied to prose; do those scenes affect me so deeply because I already had a visceral knowledge of the novels, or would they stand on their own? And would they be so meaningful if they’d been written out? Are there some things that really only work in the visual medium?

There are the usual minor changes to the novel. The only one that really disappointed me was riding the horse down the beach–Bunter replaces Peter, which may have been a matter of the actors’ riding ability, or simply that the available stuntman had dark hair. So far as guest casting goes, Jeremy Sinden as Henry Weldon is wonderfully odious!

Book: Have His Carcase

DVD: Have His Carcase

Tomorrow’s the launch of The Moonlight Mistress

2 Responses to Have His Carcase – Peter Wimsey on tv