Grit Under My Boots

If I’m reading a historical novel, or for that matter, a science fiction or fantasy novel, or a romance, or any other genre, I want to feel the grit underneath my boots.

Even in a shiny futuristic city where everyone wears white because nothing is dirty, I want to see the dirt. Because the dirt has to be there somewhere. Someone has to be cleaning up that shiny city. Maybe it’s robots. But somebody takes care of the robots, or the robots have artificial intelligence, and I want to know how they feel about their role in making the city shiny for the humans. 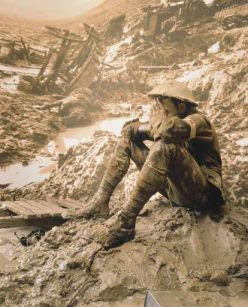 Or in a historical, I want the dirt. If the story’s about rich people, I at least want hints of what their servants do and think, and how the rich people think about those issues. I understand the story’s not about that, but I still want to know, just enough to fill the place in my brain that suspends my disbelief.

If I don’t get the grit, or even the hint of grit, I feel the lack. The world isn’t real to me, and thus the story can’t be true. By “true” I mean that it speaks to me, that there is a truth to the story I can feel deep down. A story with truth is honest. It doesn’t ignore the realities of our world: gender discrimination, racism, classism, human rights. Even in a book that’s meant to be an escape, I want to know it’s possible, in the imaginary world of the book, to address those issues. If they’re ignored too completely, it’s like the door of an enclave slamming down: you’re not allowed in here.

Victoria Janssen [she, her] currently writes cozy space opera for Kalikoi. The novella series A Place of Refuge begins with Finding Refuge: Telepathic warrior Talia Avi, genius engineer Miki Boudreaux, and augmented soldier Faigin Balfour fought the fascist Federated Colonies for ten years, following the charismatic dissenter Jon Churchill. Then Jon disappeared, Talia was thought dead, and Miki and Faigin struggled to take Jon’s place and stay alive. When the FC is unexpectedly upended, Talia is reunited with her friends and they are given sanctuary on the enigmatic planet Refuge. The trio of former guerillas strive to recover from lifetimes of trauma, build new lives on a planet with endless horizons, and forge tender new connections with each other.
View all posts by Victoria Janssen →
This entry was posted in genre, reading, writing craft. Bookmark the permalink.