It’s All in the Details

My new book from Harlequin Spice, a historical with werewolves, is titled The Moonlight Mistress and it’s out this month. I’ve been amusing myself by going through my copy and re-reading my favorite moments, many of which are bits of historical detail. I love the tiny bits best.

See, I am a total geek and really love research for its own sake. It grieves me that I don’t have time to read every one of my research books cover to cover…I buy rather more research books than I really need, and some of them are only peripherally related to the topics of my novels, but they’re all just so interesting! And that’s not even counting the books I check out of the library. 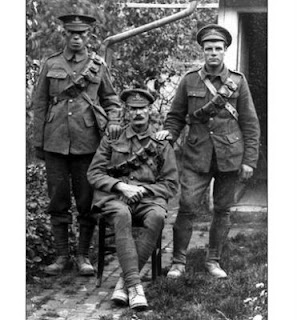 Just in case some of you readers are research geeks as well, here are my favorite World War One historical bits from The Moonlight Mistress and where I found them. I think that often the most interesting details, that give the greatest sense of realism to the narrative, are not the most major. It’s the tiny, unusual facts that stand out for the reader.

The novel’s opening line is “There were no trains to Strasbourg.” And this is absolutely true. When the first declarations of war were flying back and forth, all sorts of daily activities were affected. I pored over Lyn Macdonald’s 1914: The Days of Hope

, which is a collection of first-person accounts placed into chronological order. One of those accounts, from the very day Germany declared war, mentioned in passing that there were no trains to Strasbourg. I couldn’t shake that bit of information from my head; something about the specificity of it, and the narrator’s shock that things were not as they should be, perfectly summed up for me the feelings of a character who’s just found out they are stranded. I never considered using another opening.

“Best of all, there was a shower…with brass fittings on three walls in the shape of lily blossoms, and tiled in green-and-white patterns like lacework.” Though I took liberties with the decorative elements, this idea of this period-appropriate shower originated in one I actually saw, at Casa Loma in Toronto; the real shower actually had six taps at three different levels. As a side note, the fancy ducal stables in The Duchess, Her Maid, The Groom and Their Lover were based on stables I saw at Casa Loma.

The extensive section on the arrival of the British Expeditionary Force in France, and the subsequent battle and retreat, was mostly drawn from first-person accounts in Macdonald’s 1914 with some fragments of information coming from several more general accounts of the First World War, including John Keegan’s The First World War

. The fate of the regiment’s boy trumpeters – to be left behind when their regiment sailed to war – came directly from the first-person accounts, as did the information that bandsmen might be assigned to be stretcher bearers. More than one account mentioned that many of the soldiers had new, ill-fitting boots. Even the crops growing in the fields the soldiers passed were all noticed by contemporary observers.

Many of the quotidian details about the lives of the British soldiers I drew from Tommy: The British Soldier on the Western Front 1914-1918

by Richard Holmes, including small economic facts such as this one: “…Lincoln owed Hailey a guinea sixpence, enough for a new overcoat.” 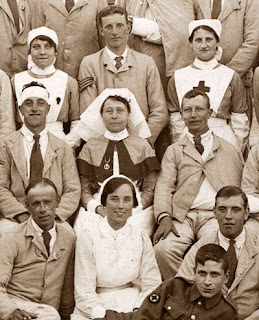 Finally, most of the information about the hospital where Lucilla goes to work were extrapolated from The Women of Royaumont: A Scottish Women’s Hospital on the Western Front

and several other volumes about or written by British nurses and VADs. After taking the basic information, that there were hospitals staffed almost entirely by women, I blended details from different sources to suit my purposes, combining occurrences and locations. For instance, “She managed a greeting in Hindustani; her phrases were limited, but efficient” was drawn from a first-person account by a nurse who served on a hospital train, in Diary of a Nursing Sister on the Western Front: 1914-1915

. Shipment and supply problems at Royaumont led me to include this bit of detail: “Tanks of nitrous oxide were procured, but some of the tanks of oxygen needed to mix with it had leaked and arrived empty, and had to be replaced.”

I could go on, but I think I’ve made my point. At the start of a project, you never know what details you might need and which sources might have the best details, so it’s best to check out a wide range, and to pay close attention to everything.

Related Posts:
Historical Detail in Fiction.
Synergy in Writing and Research.
Reading for the Writer.

Victoria Janssen [she, her] currently writes cozy space opera for Kalikoi. The novella series A Place of Refuge begins with Finding Refuge: Telepathic warrior Talia Avi, genius engineer Miki Boudreaux, and augmented soldier Faigin Balfour fought the fascist Federated Colonies for ten years, following the charismatic dissenter Jon Churchill. Then Jon disappeared, Talia was thought dead, and Miki and Faigin struggled to take Jon’s place and stay alive. When the FC is unexpectedly upended, Talia is reunited with her friends and they are given sanctuary on the enigmatic planet Refuge. The trio of former guerillas strive to recover from lifetimes of trauma, build new lives on a planet with endless horizons, and forge tender new connections with each other.
View all posts by Victoria Janssen →
This entry was posted in guest, moonlight mistress, research, wwi. Bookmark the permalink.

2 Responses to It’s All in the Details