A while back, my friend Meredith Schwartz edited an electronic anthology titled Alleys and Doorways: Stories of Queer Urban Fantasy for Torguere Press, and I agreed to write an Elspeth Potter story for it. I started that story over twice and eventually abandoned my initial attempt and wrote something completely different in a very limited time period, so it was an interesting experience for me.

Lethe Press has now published a print edition. It’s available on Amazon.com so far. I’m not sure how soon it will be available elsewhere. And, possibly ironically, a Kindle edition as well. I haven’t yet seen my own physical copy, but I really like the cover! 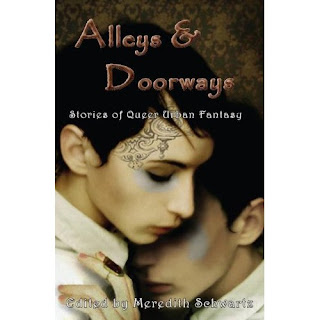 “In Alleys & Doorways, editor Meredith Schwartz has brought together stories of the odd and mysterious ways that queer life happens in the city. Covering a wide range of styles, moods and emotions, from the poignant and erotic to the whimsical, these tales from a roster of acclaimed authors strive to create new legends for gay urbanites. Featuring several stories that were finalists for the Gaylactic Spectrum Award, this anthology promises to enchant you. Be wary where you read these stories…that train ride, that bus, that sidewalk may lead you to someplace Else…but be assured that your destination in these new alleys, these new doorways, will be an exciting one!”

Here’s a review of the anthology at Reviews by JesseWave.

Victoria Janssen [she, her] currently writes cozy space opera for Kalikoi. The novella series A Place of Refuge begins with Finding Refuge: Telepathic warrior Talia Avi, genius engineer Miki Boudreaux, and augmented soldier Faigin Balfour fought the fascist Federated Colonies for ten years, following the charismatic dissenter Jon Churchill. Then Jon disappeared, Talia was thought dead, and Miki and Faigin struggled to take Jon’s place and stay alive. When the FC is unexpectedly upended, Talia is reunited with her friends and they are given sanctuary on the enigmatic planet Refuge. The trio of former guerillas strive to recover from lifetimes of trauma, build new lives on a planet with endless horizons, and forge tender new connections with each other.
View all posts by Victoria Janssen →
This entry was posted in erotica, promo. Bookmark the permalink.