I like the fantastic. I like magic and surrealism and being transported to another world by a book. And as anyone who has read pretty much anything I’ve written knows, I like to mix magic, surrealism, and escape with eroticism. But there reaches a point where if the sex itself is too “airy fairy,” if the Vaseline is smeared on the lens too thick, that it simply isn’t hot anymore. 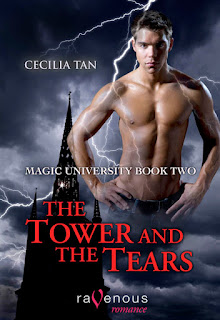 So, imagine our hero and heroine are in bed (or on the couch, kitchen table, backseat of a royal carriage, wherever…). The writer may have made them as perfect as possible, the ultimate wish-fulfillment, but a soaring description of their virtues is not what I find erotic. Where are the details? Sure, they kiss, but how about telling me what the short hairs behind his ear feel like to her lips as she nibbles his neck? What do the sheets feel like on the bottoms of her feet as she slides back on the bed to make room for him? Can she hear anything above her own breath, or his, and if so, what?

The addition of these kinds of details accomplishes many things for me as a writer. First, the smallest thing can be what anchors the reader in the scene as if they are there. They go from watching the action from afar to being right in the bed with them. It can be something as small as mentioning that they had to move more to the center of the bed because they were getting too close to the edge and the reader being able to picture it exactly. That’s all the more important with a fantasy setting or with alien or magical characters whom you still want your reader to identify with.

For example, in the Magic University books, I have some of the characters studying Esoteric Arts, which is a fancy term for sex magic. Some of them are quite powerful, and can literally move the Earth when they have sex, but it’s important to me that the sex our characters have is still fraught with emotional realism, as well as realistic expectations about how it works. Take this scene from the latest book in the series, The Tower and the Tears, in which our hero has been seduced at the Halloween Ball by a mysterious temptress:

There was no music now, but she seemed like she was still dancing as she ran her hands up and down his bare arms, tracing designs with eager-eyed grace. She turned him in a circle and slipped the shoulder of her costume down, baring one breast. She had a tattoo of a tiny dragon near her sternum.

Kyle suddenly knew her for who she was. Ciara. He’d never seen her in makeup before, and he hadn’t realized she was wearing a wig. He reached for her but she flitted away like a butterfly, her hands still moving as she slipped the costume to the floor completely. Then suddenly she twirled close, her hand finding him unerringly under the edge of the toga, cool fingers wrapping around him.

Aha. They hadn’t gotten to studying the goddess of sacred sex in Esoteric Arts class yet, but Kyle had seen the statues. He just nodded and let her undo the knot at his shoulder, the toga falling away. She pushed him back onto the bed and straddled him.

Kyle let her grind against him, then looked up in surprise as she snapped her fingers and a condom still in its wrapper appeared in her hand. Kyle made a mental note to learn some prestidigitation one of these days.

Second, details are a chance to characterize. What one character would notice or think about is different from what another one would. 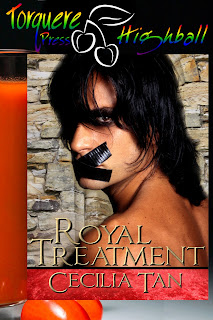 This is true whether I am writing in first person or third person, but it especially comes out in the first person, where the narrator’s own voice and attitude can come through in the prose. In my recent Torquere Press novella, Royal Treatment, I use the first person voice to tell the story of Arshan, a young noble in a BDSM-dominated world who finds himself wrapped up in court politics. He’s a dominant, but if he doesn’t play his cards right, might end up collared for life to the crown princess. He’s always looking for the way to understand the people around him and influence them, so both the details he notices and chooses to remember about his allies and enemies both works in the plot and paints a vivid picture for the reader. And I get to provide a very visceral experience close-in on his point of view.

She climbed off and sat back in a chair with a tired exhalation. The fire had long since gone out, and she pulled her robes around her. “You didn’t come,” she said, her eyes narrowing.

“No, my lady. You didn’t give permission,” I said from where I was still lying on the table. I sat up, sensing the mood shifting.

“Arian adepts can orgasm without ejaculation, though,” she said. “How do I know you are not lying?”

I dropped to my knees on the stone in front of her, the open and vulnerable stance again. Now was not the time for cheek. “You don’t. I have no way to prove my innocence, and I accept whatever punishment you set before me.”

She frowned, but not about what I said. “You are like water that flows around a stone,” she said.

“I am sorry if that offends you, my lady.”

She laughed then and reached out to tousle my hair, and for a moment, I felt the difference in our ages. “It does not offend me; it frustrates me,” she said. “Because you know how hard it is to break water? Impossible. Your father was all stone. You are something else.”

So maybe it’s not always how their lips taste, but how their shoulder tastes. Maybe it’s not about the satin sheets but what shape the blanket has been mashed into by the end. Maybe it’s not what the characters say (I will never, ever have a character say “oh baby” in a sex scene, except, perhaps, as a joke…!) but what they choose not to say while making love.

These are the things that make a situation and a character feel real to me, and something more than just a “fantasy.” I feel like they might step right out of the page they are so real, and I hope the reader feels the same way.

Victoria Janssen [she, her] currently writes cozy space opera for Kalikoi. The novella series A Place of Refuge begins with Finding Refuge: Telepathic warrior Talia Avi, genius engineer Miki Boudreaux, and augmented soldier Faigin Balfour fought the fascist Federated Colonies for ten years, following the charismatic dissenter Jon Churchill. Then Jon disappeared, Talia was thought dead, and Miki and Faigin struggled to take Jon’s place and stay alive. When the FC is unexpectedly upended, Talia is reunited with her friends and they are given sanctuary on the enigmatic planet Refuge. The trio of former guerillas strive to recover from lifetimes of trauma, build new lives on a planet with endless horizons, and forge tender new connections with each other.
View all posts by Victoria Janssen →
This entry was posted in erotica, guest, writing craft. Bookmark the permalink.