Night held me as I crawled and scrambled near
The Turkish lines. Above, the mocking stars
Silvered the curving parapet, and clear
Cloud-latticed beams o’erflecked the land with bars;
I, crouching, lay between
Tense-listening armies peering through the night,
Twin giants bound by tentacles unseen.
Here in dim-shadowed light
I saw him, as a sudden movement turned
His eyes towards me, glowing eyes that burned
A moment ere his snuffling muzzle found
My trail; and then as serpents mesmerise
He chained me with those unrelenting eyes,
That muscle-sliding rhythm, knit and bound
In spare-limbed symmetry, those perfect jaws
And soft-approaching pitter-patter paws.
Nearer and nearer like a wolf he crept–
That moment had my swift revolver leapt–
But terror seized me, terror born of shame
Brought flooding revelation. For he came
As one who offers comradeship deserved,
An open ally of the human race,
And sniffling at my prostrate form unnerved
He licked my face! 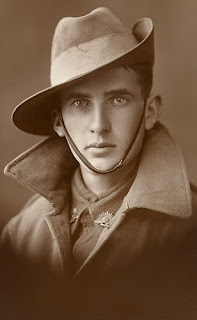 Victoria Janssen [she, her] currently writes cozy space opera for Kalikoi. The novella series A Place of Refuge begins with Finding Refuge: Telepathic warrior Talia Avi, genius engineer Miki Boudreaux, and augmented soldier Faigin Balfour fought the fascist Federated Colonies for ten years, following the charismatic dissenter Jon Churchill. Then Jon disappeared, Talia was thought dead, and Miki and Faigin struggled to take Jon’s place and stay alive. When the FC is unexpectedly upended, Talia is reunited with her friends and they are given sanctuary on the enigmatic planet Refuge. The trio of former guerillas strive to recover from lifetimes of trauma, build new lives on a planet with endless horizons, and forge tender new connections with each other.
View all posts by Victoria Janssen →
This entry was posted in dearmer, holiday, wwi poetry. Bookmark the permalink.