She was a city of patience; of proud name,
Dimmed by neglecting Time; of beauty and loss;
Of acquiescence in the creeping moss.
But on a sudden fierce destruction came
Tigerishly pouncing: thunderbolt and flame
Showered on her streets, to shatter them and toss
Her ancient towers to ashes. Riven across,
She rose, dead, into never-dying fame.
White against heavens of storm, a ghost, she is known
To the world’s ends. The myriads of the brave
Sleep round her. Desolately glorified,
She, moon-like, draws her own far-moving tide
Of sorrow and memory; toward her, each alone,
Glide the dark dreams that seek an English grave. 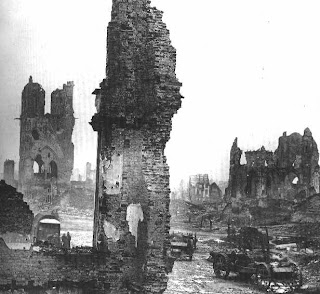 Victoria Janssen [she, her] currently writes cozy space opera for Kalikoi. The novella series A Place of Refuge begins with Finding Refuge: Telepathic warrior Talia Avi, genius engineer Miki Boudreaux, and augmented soldier Faigin Balfour fought the fascist Federated Colonies for ten years, following the charismatic dissenter Jon Churchill. Then Jon disappeared, Talia was thought dead, and Miki and Faigin struggled to take Jon’s place and stay alive. When the FC is unexpectedly upended, Talia is reunited with her friends and they are given sanctuary on the enigmatic planet Refuge. The trio of former guerillas strive to recover from lifetimes of trauma, build new lives on a planet with endless horizons, and forge tender new connections with each other.
View all posts by Victoria Janssen →
This entry was posted in binyon, wwi poetry. Bookmark the permalink.