I recently completed the second draft of a novel about a soap opera actress in mid-1970s New York City who’s haunted by the ghost of her best friend who died protesting the Vietnam War. (The working title of the book is Some Misplaced Joan of Arc, but through the writing process I’ve mostly referred to it as “the Jo book.”) I already knew a lot about soap operas and the ’60s-’70s anti-war movement before I began writing, and I’m not sure I realized just how much research I would need to do.

I was ten years old in 1975, and in some respects I remember the time period very well. Yet it is in many ways a different world (not to mention the fact that I spent that time in Los Angeles, not New York). When I was writing a scene in which my protagonist Jo goes to see the newly released Dog Day Afternoon, I assumed she could go to her neighborhood movie house–but research revealed that the film only screened in one (now defunct) Manhattan movie theater when it first opened: Cinema 1. A friend of mine with access to newspaper archives even found me a New York Times ad for Dog Day Afternoon that included showtimes! Cinema Treasures, an online guide to classic movie theaters, provided a lot of info on Cinema 1. 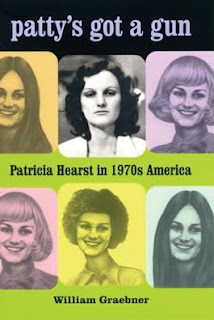 A number of historical events are referenced in my novel, notably the arrest and trial of Patty Hearst. The book Patty’s Got a Gun: Patricia Hearst in 1970s America and the documentary film Guerrilla – The Taking of Patty Hearst were excellent resources on the media’s portrayal of the Hearst case. Again, my friend with access to newspaper archives helped me with specific news items, and I was amazed to learn that the New York Times headline for Patty Hearst’s guilty verdict was: “MISS HEARST IS CONVICTED ON BANK ROBBERY CHARGES.” I made frequent use of The Vanderbilt Television News Archive, which contains detailed descriptions of U.S. national network news broadcasts–including commercials–going back to 1968.
For information about the movement against the Vietnam War, as well as other political activism of the ’60s-’70s, Cathy Wilkerson’s Flying Close to the Sun: My Life and Times as a Weatherman and Dan Berger’s Outlaws of America: The Weather Underground and the Politics of Solidarity were useful, as were the documentaries Rebels With a Cause and The Weather Underground.

As for the soap opera aspect of my novel, 1970s daytime dramas were produced in a very different way than they are today. Fortunately my friends Lara Parker (who played Angelique on Dark Shadows) and Rory Metcalf (who wrote for Ryan’s Hope) answered my questions, as did Peter White, who played Linc on All My Children at just the time period of my novel. I also consulted biographies of soap opera actors and soap opera reference books, as well as Eight Years in Another World (a wonderful memoir by former Another World head writer Harding Lemay) and We Love Soaps, a great source of interviews and archival material. 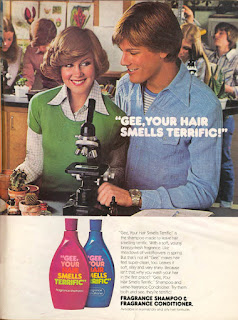 A number of soap opera actresses have penned soap opera murder mysteries, from which I gleaned some behind-the-scenes information amid the dropping corpses. Books in this little subgenre include Louise Shaffer’s All My Suspects and Eileen Davidson’s Death in Daytime and Dial Emmy for Murder.

The other sources I used for Jo book research are too numerous to mention, but a few highlights include a 1976 NYC TV Guide, the 1975-76 Trans World Getaway Guide to NYC, the Mr. Pop Culture week by week archives, and a webpage of ’70s toiletries advertisements, Stuck in the 70s. Sometimes a tiny, half-forgotten detail, like Love’s Baby Soft or Gee, Your Hair Smells Terrific, can help bring a scene–and the time period of a novel–to life.

Gwynne Garfinkle lives in Los Angeles. Her fiction and poetry have appeared in Strange Horizons, Goblin Fruit, Aberrant Dreams, Space & Time, and the Clockwork Jungle Book issue of Shimmer. She is represented by Diana Fox of Fox Literary.

Victoria Janssen [she, her] currently writes cozy space opera for Kalikoi. The novella series A Place of Refuge begins with Finding Refuge: Telepathic warrior Talia Avi, genius engineer Miki Boudreaux, and augmented soldier Faigin Balfour fought the fascist Federated Colonies for ten years, following the charismatic dissenter Jon Churchill. Then Jon disappeared, Talia was thought dead, and Miki and Faigin struggled to take Jon’s place and stay alive. When the FC is unexpectedly upended, Talia is reunited with her friends and they are given sanctuary on the enigmatic planet Refuge. The trio of former guerillas strive to recover from lifetimes of trauma, build new lives on a planet with endless horizons, and forge tender new connections with each other.
View all posts by Victoria Janssen →
This entry was posted in guest, historical fiction, research, television. Bookmark the permalink.