I’m a guest poster today at the Novelists, Inc. Blog on “Promotional Drops in the Online Bucket.” Please drop by and check it out!

I recently re-read Jane Eyre in conjunction with Jessica of Read React Review, and am posting about it today, Saturday, and Sunday (there will be a discussion on her blog beginning May 23rd). That’s a photo of my tattered copy to the right, which I’ve now had to reinforce with tape. I never read Jane Eyre until after I’d graduated college. I finally did thanks to a dear friend who’d first read it at age eight and loved it beyond the telling. This was, I think, my third or fourth read of the book, but it’s the first time I’ve read it this closely. Note my posts will not be strictly linear, so if you haven’t read the book, I apologize in advance for any confusion. 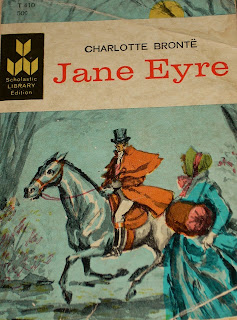 The main new insight I had on this read was how much Rochester is a sort of future or alternate version of Jane; I also felt sometimes that Brontë was using his character to comment on what womens’ lives were like, and how they might escape their roles. For example, when Jane decides to leave Lowood, she can’t really hope for total happiness because she can’t even imagine it; she can only go so far as ask for “a new servitude.” Later, Rochester (obliquely referring to his marriage to Bertha, who’s now insane) insists that he has a “right to get pleasure out of life.” His comment is like the next step in feminist thought! As a man (and older as well), he has the confidence to go farther than Jane yet dares. In that conversation, Rochester also talks about remorse; his dialogue could easily have been shifted to a woman trapped in an unwise marriage.

After Bertha sets Rochester’s bed on fire, the emotionally intense scene between Jane and Rochester, followed by his abrupt leavetaking the next day, is echoed in thousands of romance novels down the road. “My–” He stopped, bit his lip, and abruptly left me.” He keeps Jane at a distance after that, though she does not wallow in abandonment. She immediately takes steps to try and sever her emotional ties to Rochester and find a new life for herself in a new place (she thinks of advertising for a new position). 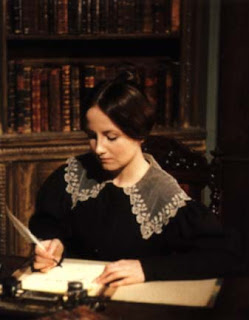 When Rochester disguises himself as a fortuneteller, he seems to be trying to draw Jane into an admission that she cares for him; I think his attendance on Blanche Ingram is for a similar reason–he wants to make Jane jealous, so she will admit she loves him. Both actions are cruel; he’s fooling both women in different ways, but I suspect he feels justified because he’s trying to save himself with Jane. Rochester confirms some of this impression himself, later on. Later in the book, Jane tells him he can’t find salvation in another person; he must seek it within. In one of the many doublings/mirrorings in the novel, this statement is echoed by Eliza Reed to Georgianna Reed.

Another interpretation of the fortuneteller scene, possibly happening at the same time, is that Rochester is trying to entice Jane into reaching for happiness instead of fearing to want anything for herself and remaining static. (As a child, Jane says she’d do anything to be loved. As an adult, she’s much more cautious.) Also, Rochester might again be representing what a woman could be if she had a man’s place in society. “I wish to foster, not to blight.” I could be stretching a bit here, but that’s what it made me think!

Rochester constantly uses diminutives when speaking to Jane, but what stuck out most to me is “elf” and the various other supernatural appellations. Jane is more than merely human to him; she’s a hope for a life he’d thought unattainable. So while he sees her as human and tries to manipulate her at times, he’s also a bit in awe of her.

Jane describes Rochester as “familiar to me as my own face in a glass; as the speech of my own tongue.”

In the scene after Bertha has stabbed her brother Richard, all sorts of things happen which the re-reader understands but Jane does not; right then was Rochester’s opportunity to tell Jane he’s married, but he can’t bring himself to do it; I think he’s too afraid she will reject him (as she eventually does). He wants to cling to the illusion of the life he could have had if he’d never married Bertha. After Mason is gone, Rochester is clearly clinging to what is “real, sweet, and pure,” both Jane and the garden, which early on she described as “orderly.” Despite Rochester’s opinion of her, Jane herself struggles for order continually, to master the wild passions she expressed as a child and that still come out in her fey artwork.

In the garden, Rochester tells Jane, in a theoretical way, about his wife. It’s almost a proposal of marriage (in the aspect of asking for ultimate trust), and makes an interesting comparison with his actual proposal later. He really fears losing Jane, and that is his strongest motivation. Not only does she like him for himself, I think she reflects some of that liking back to him, so he’s more able to like himself. He says she improves him; she feels he should seek improvement within, not from her. At the end of that conversation, Rochester taunts Jane with Blanche; it’s a kneejerk reaction to what he sees as rejection (she hurt me, so I will hurt her). Jumping ahead in the story, when he actually proposes, again he teases her and leads her along until she confesses she wants him; only then, presumably feeling safe in her affection, does he embrace her and propose marriage.

And then, Jane is the one who leaves, when she learns her cousin John is dead and her Aunt Reed not long for the world. Jane and Rochester are friends again before she goes–I love their cute banter over her travel money, when he tries to give her a gift but she refuses, and he angles for a kiss but doesn’t get it.

When she returns, many things are different, not least Jane, who reconciles herself to lack of ties with her Reed cousins.

Tune in tomorrow and the day after for more!

I welcome comments if you’ve read Jane Eyre or had an interesting experience while re-reading another favorite.